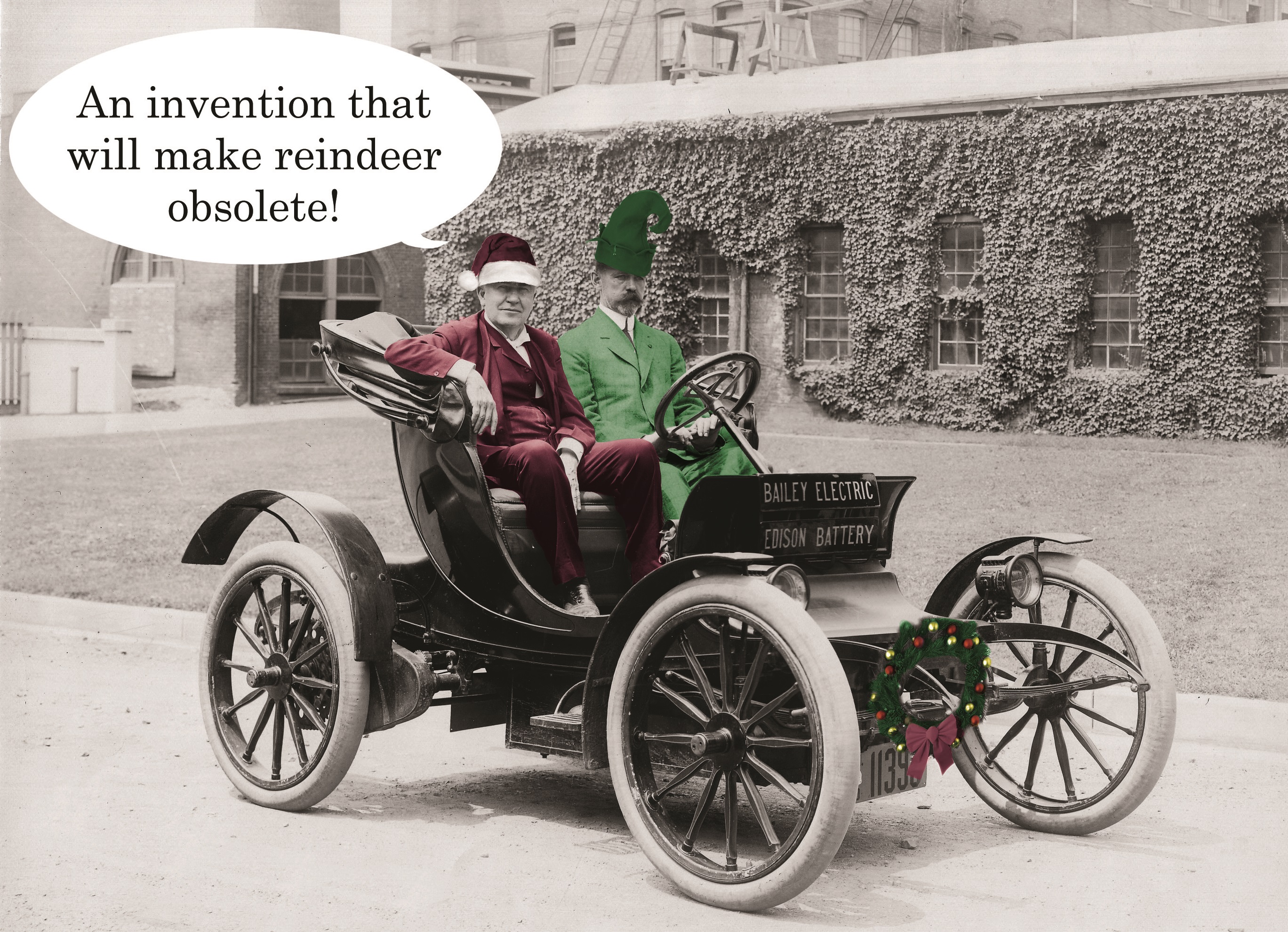 Seasons Greetings from the Edison Papers!

Seasons Greetings from the Edison Papers!

We are very excited to announce Volume 8 is now available.  Be sure to order your copy of The Papers of Thomas A. Edison: New Beginnings, January 1885-December 1887 (Volume 8). As you will see below, we have been busy. Our new blog, Edison Findings is now live (see below). We want to thank National Endowment for the Humanities, National Historical Publications and Records Commission and The New Jersey Historical Commission for their continued support.  And we want to thank all of you who have donated this year. Please consider making a year-end donation or a scheduled donation for next year.  Your donations help!

As always, we appreciate your support.  May you have a peaceful and joyful holiday season!

Will you consider supporting the Edison Papers this year?  Thomas Edison enjoyed a remarkably creative and exceptionally well-documented life.  The Thomas Edison Papers is dedicated to making these records accessible to the public and students at all levels. We invite you to share in making these papers accessible, please consider making a contribution or a monthly donation here!

Shop through our Amazon link!

Add Volume 8 to your personal collection this holiday season! Purchase your copy through our Amazon link and support the Edison Papers.

National Endowment for the Humanities 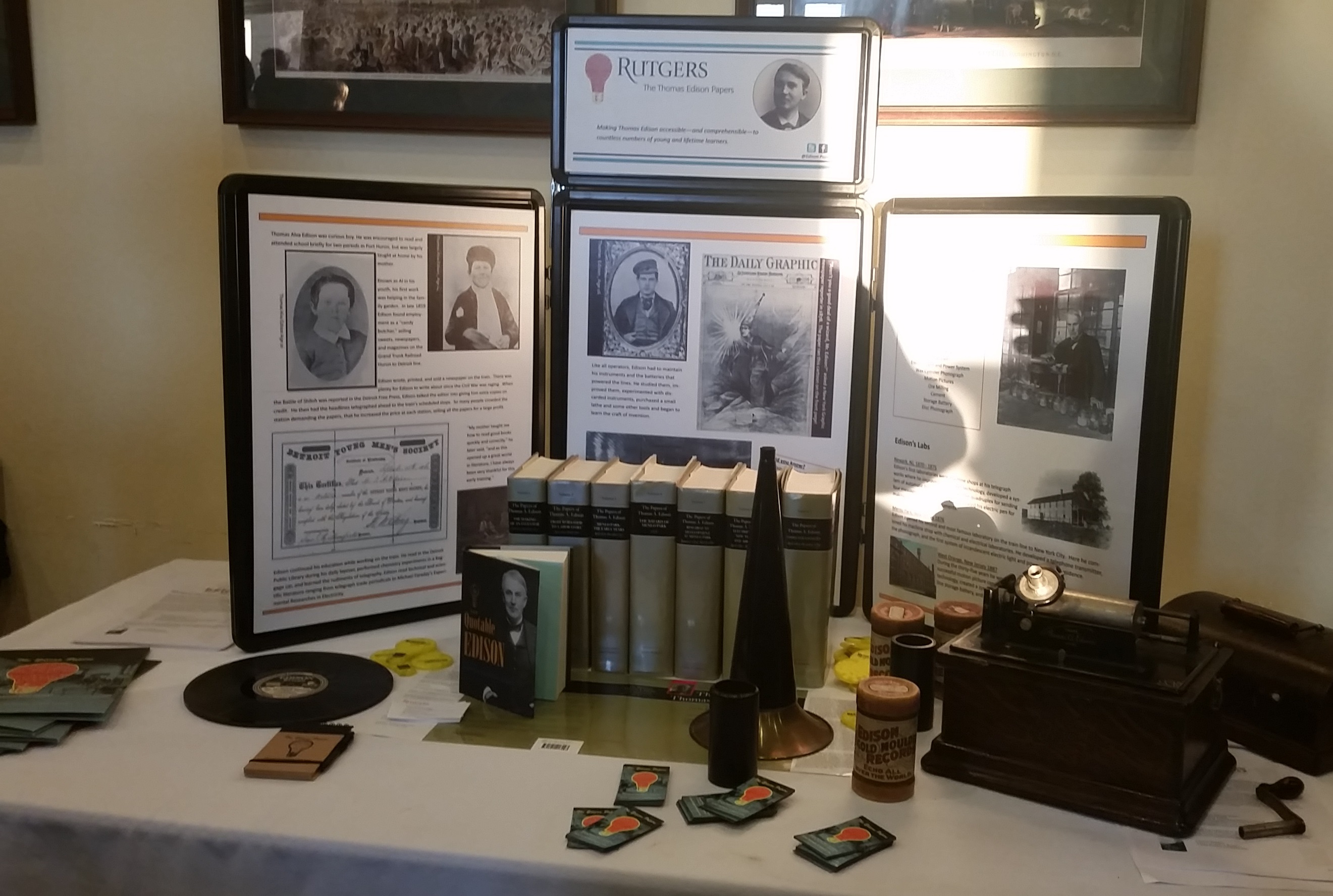 This year, the National Endowment for the Humanities celebrated its 50th Anniversary. The Edison Papers were invited to Washington, D.C. for the celebration and to share our work as a representative example of transformative NEH grants. In addition, Rutgers helped sponsor the event to honor NEH's contributions to the academic world. Congressmen Leonard Lance (R-NJ) and David Price (D-N.C.), co-chairs of the Congressional Humanities Caucus, spoke at the event. Read full article here.

Over the past 50 years, NEH has awarded $5.3 billion in grants, of which $2 billion in grants went to universities and colleges. President Lyndon B. Johnson signed the National Foundation on the Arts and the Humanities Act on September 29, 1965. It created the National Endowment for the Humanities as an independent federal agency. "The humanities," the current legislation declares, "belong to all the people of the United States." Explore and enjoy NEH 50 projects here. 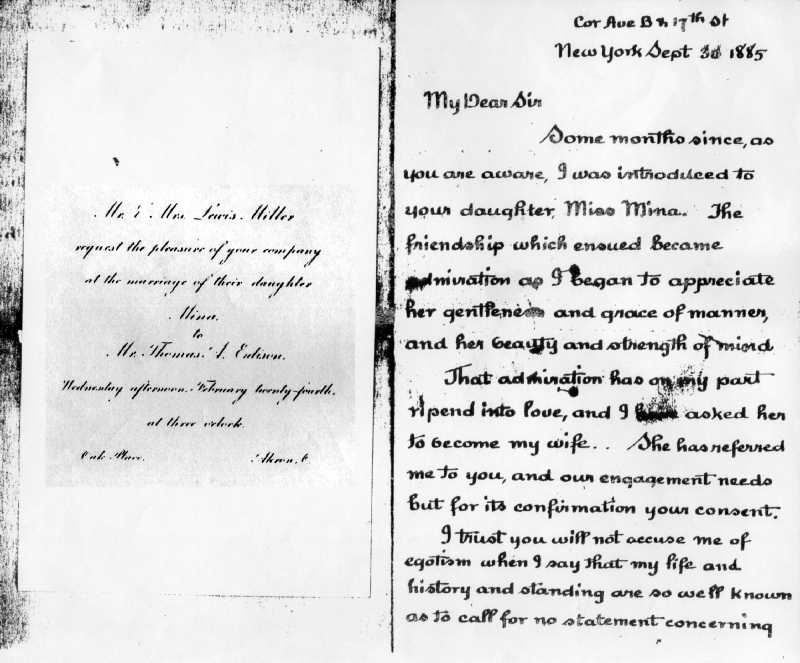 It was during the summer of 1885 that Thomas Edison, who had become a widower in August of the previous year, developed a romantic interest in Mina Miller, the nineteen-year-old daughter of Ohio inventor and manufacturer Lewis Miller. In late June and early July, Edison and Miss Miller were both guests at the summer home of Ezra and Lillian Gilliland in Winthrop, Mass. Mina had just finished her first year at Miss Abby H. Johnson's School and was visiting briefly with the Gillilands before returning home to Akron on summer vacation.

As Edison recorded in the diary he kept at Winthrop later in the summer, his brief encounter with Mina had left him smitten. "Got thinking about Mina and came near being run over by a streetcar," Edison wrote in his diary, which was purposely written to be read to the Gillilands and their guests, all of whom were friends of Mina Miller.

In early August, Edison traveled to Chautauqua, New York, with his daughter Marian and the Gillilands to meet Mina and her family. Lewis Miller was a co-founder of the Chautauqua Institution, a Methodist educational conclave that met each summer on the banks of Lake Chautauqua. The Millers were impressed enough with Edison to allow Mina to join his party for an excursion to the White Mountans, which included stops at Alexandria Bay and Montreal. It was in the White Mountains that he proposed, tapping the question in Morse code in Mina's hand, as she later recalled. She tapped back, "Yes."

Having secured her assent, Edison parted from Mina at the trip's end and returned to New York. From there, at the end of September, he wrote a formal letter asking, in accordance with longstanding tradition, for Lewis Miller's consent to marry Mina. Miller agreed and Mina became Edison's second wife on February 24, 1886.

A bit of a mystery has surrounded Mark Twain's 1888 visit to Thomas A. Edison. Historians, who by nature are interested when two titans from different spheres come together, have been fairly certain such a visit took place, but exactly when, where, and under what circumstances have proved elusive. Until now. 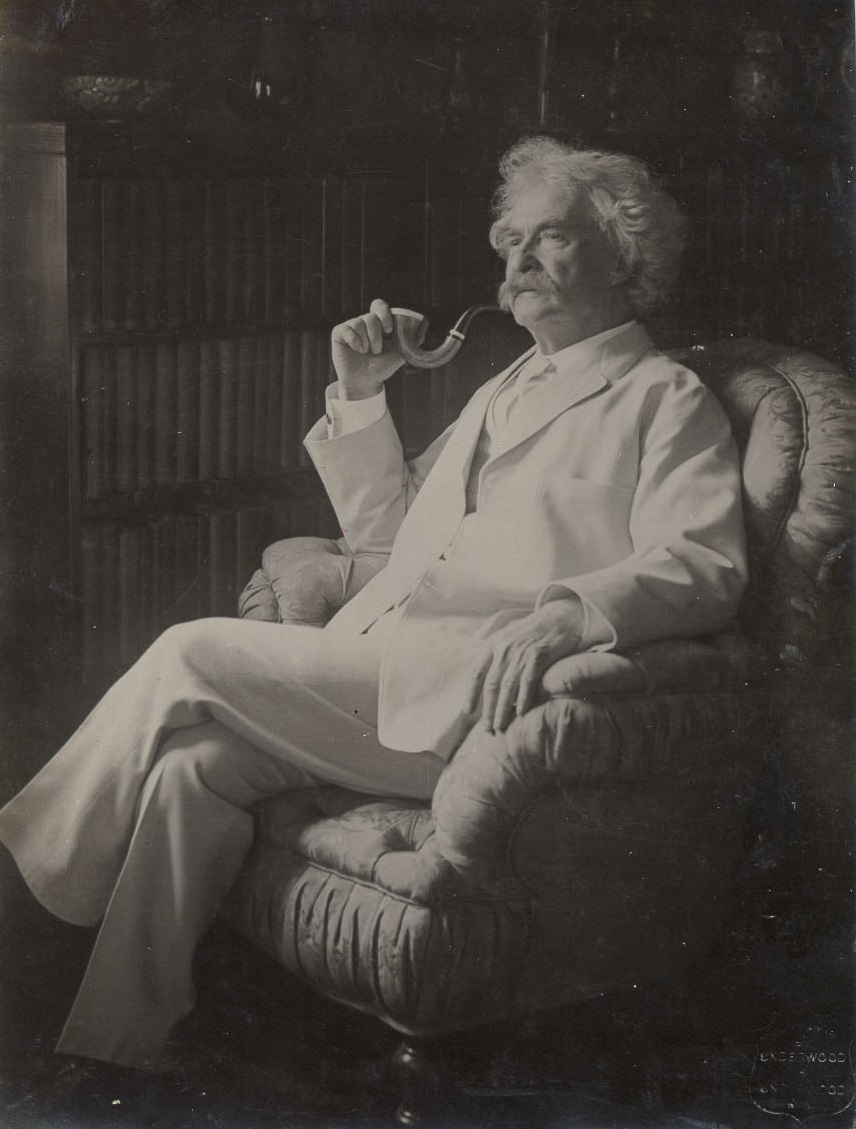 Thomas E. Jeffrey, senior editor at the Edison Papers, recently unearthed a 1927 letter from Edison that in part clears up some of the mystery. In early January of that year, Edison received a letter from Cyril Clemens, the president of the Mark Twain Society in Webster Groves, Mo. "I am gathering material for a life of Mark Twain," wrote Clemens, a cousin of the famed author. "Would you be so kind as to tell me your opinions of the humorist, and if you ever met him."

Edison replied a few days later in a typed letter now in the manuscript collection of the Library of Congress [X042DG]. He said that Twain did come once to his laboratory in West Orange in company with the Canadian writer George Iles. "He told a number of funny stories," Edison wrote, "some of which I recorded on phonograph records. Unfortunately, these records were lost in the big fire which we had at this plant in 1914."

Twain died in 1910. As a result, the loss of these phonograms of Twain speaking extemporaneously is regrettable almost beyond measure. Had they survived, their significance to historians, both of technology and literature, would be incalculable since no recordings of Mark Twain's voice, which is said to have been inimitable, are known to exist.

Although he could no longer provide Cyril Clemens with phonograms of Twain's voice, Edison did provide an anecdote. He recalled that when Twain and Iles were ready to leave, a rain storm came up, and as they opened the door a gust of rain blew in on them both. Said Twain to Iles, "I guess we are caged for awhile." Iles noticing a carriage at the door, belonging to a visitor, suggested "Let us take this carriage." "No," said Mark, "It is not ours." Iles replied "That don't matter, let's take it anyway." Twain, in his drawling way said, "Business man's idea! Business man's idea!" As to his opinion of Twain, Edison remarked that "he was more than a humorist. He was a practical philosopher."

With Edison's letter to Cyril Clemens in hand, Allie Rimer, assistant editor at the Edison Papers, was able to locate Clemens original letter of January 5, 1927, in the archives at the Thomas A. Edison Historical Park in West Orange, N.J. This letter includes Edison's hand-written draft of the typed letter finally sent to Clemens in reply.

Edison's response to Cyril Clemens, clears up where his 1888 meeting with Mark Twain took place and under what circumstances, at least in part. But the question of precisely when required further research. In late May 1888, Twain had asked to visit Edison in order to see the inventor's new wax-cylinder phonograph. The author hoped to use the machine to complete the novel on which he was then working– A Connecticut Yankee in King Arthur's Court. Unfortunately, circumstances prevented this meeting. This meant that the meeting to which Edison refers in his 1927 letter likely took place in June, since Twain spent the better part of July and August in Elmira, New York. But the available correspondence between Edison and Twain did not provide a more definite answer to the question of when the visit took place. The mystery was finally solved, though, in a roundabout way. In researching the date on which Edison and his associates negotiated the sale of the inventor's phonograph interests, Louis Carlat, associate editor at the Edison Papers, found court testimony [HM89ACG] in which Edison recalled that the final negotiations took place at the West Orange Laboratory on the same day Twain and Iles made their visit. Edison said the date was 21 June 1888, which seems to give a date certain on which Twain made his historic visit, at least if Edison's memory served. Click to read the full article.

A More Prosaic Light: Essays, Revisions, and Reviews 1987-2015 by Edison Papers assistant editor Daniel Weeks is now available from Amazon.com, Barnes and Noble.com, and other online distributors. Among the essays are several relating to Edison's phonograph, including "Did Edison Record Whitman?" "A Voice from Beyond the Grave: The Robert Browning Phonogram," and "Twain and the Phonograph." It also includes a review of W. Bernard Carlson's book, Tesla: Inventor of the Electrical Age.

" 'New and Untried Hands': Thomas Edison's Electrification of Pennsylvania Towns" by Edison Papers editors Louis Carlat and Daniel Weeks has been published in the October 2015 edition of the Pennsylvania Magazine of History and Biography, now available from the Historical Society of Pennsylvania.

The Edison Papers launched a new blog called Edison Findings. Edison Findings is open to contributions from you! Have a thought? Feel free to send it to us so we can feature it! Blog: Edison was no Twain!

Mark Your Calendar!
Rutgers has begun to celebrate 250 years on the Raritan River. Check out Rutgers 250!

Edison and Innovation Series
Have you been following Edison and the Rise of Innovation series? Check back for new essays!

NPS turns 100!
The National Park Service turns 100 this year.  Be sure you plan your visit to Edison National Historical Park!