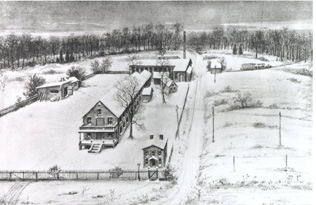 On October 1, ADT Corporation, a leader in providing electronic security for homes and businesses in the U.S. and Canada, debuted on the New York Stock Exchange as an independent publicly traded company. Previously a subsidiary of Tyco International, ADT was one of two companies that Tyco spun off at the end of September.

ADT chief executive officer Naren Gursahaney told the Financial Post that the new status as an independent company "marks an exciting milestone in our proud history." That history extends back 140 years, and like so many business entities that trace their roots to the late nineteenth or early twentieth centuries, ADT has significant connections to Thomas A. Edison.

In 1872, a number of investors in the Gold and Stock Telegraph Co. formed the American District Telegraph Co. of New York to provide telegraph service to private homes. Subscribers would have a call box installed in their homes that connected them telegraphically to a district office. This device would allow homeowners to summon the police or fire departments or call a telegraph messenger boy or physician to their homes within two or three minutes.

At the time the American District Telegraph Co. was formed, Thomas A. Edison was under contract with Gold and Stock as a consulting engineer. He had made improvements in the stock ticker first devised by Edward Calahan, which was the basis of Gold and Stock's business. A burglary at the home of Gold and Stock President Elisha Andrews prompted Calahan to devise the district telegraph system, which was essentially a security system for private homes.

Andrews and others in Gold and Stock immediately saw the commercial potential of the district system and formed the American District Telegraph Co. of New York to take advantage of Calahan's invention. They also understood the value of Edison's ideas for improving telegraphic systems, and within a year of its formation, ADT of New York purchased the rights to Edison's improvements in district and alarm telegraphs and also to his telegraphic alarm and signal apparatus.

In this way, Edison played a small, but significant role in the foundation of the company that today has become a leading provider of electronic security and monitoring services for residences and small businesses throughout North America. Today ADT, with more than $12.5 billion dollars in annual sales, serves some 6.4 million customers and has almost 16,000 employees in 200 locations in the United States and Canada.

Other than a brief afternoon celebration to welcome the publication of Volume 7, the editors and staff of the Edison Papers have had no time to rest on their laurels.  Work on Volume 8 is well underway.  In fact, in terms of developing the editorial database and taking notes on thousands of documents, work had already begun on Volume 8 well before Volume 7 rolled off the press.

Volume 8, tentatively titled New Beginnings, marks the mid-point in the projected 15-volume series of the Edison Papers.  It also documents a critical turning point in Edison's storied career.  During the period covered in Volume 8—January 1885 to December 1887—Edison remarries, begins a new family, builds a new factory and laboratory complex in West Orange, N.J., purchases a mansion in Llewellyn Park where he will finally settle down, and builds a winter retreat and laboratory in Fort Myers, Fla.

During his honeymoon, when he was relatively free from the press of business and the practical concerns of solving day-to-day engineering problems in the laboratory, Edison's mind began to range over larger theoretical concerns.  "This is the point in Edison's career," says Dr. Paul B. Israel, director of the Edison Papers, "when he's sufficiently economically comfortable so that he can think about a variety of areas of research, only some of which relate to commercial concerns."

Edison's notebooks during this time overflow with ideas.  In addition to mapping out new research possibilities for acoustics and recorded sound, electric lamps, and multiplex and wireless telegraphs, Edison allows his mind to explore ideas about the nature and interchangeability of physical forces and the possibility that new forms of energy might be discovered. "The extent of his ambition is breathtaking," says Dr. Louis Carlat, managing editor of the book edition.

"More than any other time in his career," says Israel, "he is exploring large questions. A lot of what he is planning is fundamental research rather than research for purely commercial purposes.  It's really remarkable. He's asking, 'Where do we go next?' "

Edison's speculations in March and April 1886 began to have practical ramifications later in the year and in early 1887 as he began planning and building his new laboratory in West Orange.  "You see the range of his research program reflected in the plans for his laboratory," notes Israel. "The laboratory will be stocked with all of the material, tools, and apparatus he needs so that he can undertake any kind of research.  When he thinks about the laboratory, he returns to the same things we see in the notebooks—phonograph, telephone, telegraph, lamps—and also his continuing effort to understand the fundamentals of electricity and magnetism."

Did Edison really have 10,000 attempts to develop the light bulb?

Over and over again, the question is asked: How many times did Edison fail before he successfully invented the light bulb?  Many versions of the story have it that Edison tried a certain number of experiments or different materials before he found the material (bamboo) that worked.  The number of failed experiments given in these stories usually ranges from 5,000 to 10,000 different materials. 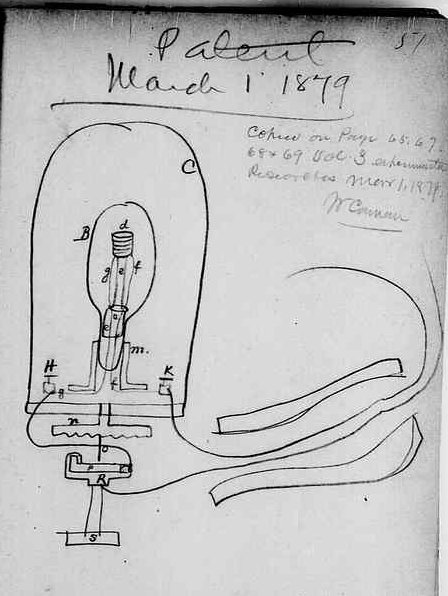 No one, including Edison, ever counted the number of experimental lamps that they made.  There were hundreds of experiments before he developed the bamboo lamp.  And many additional experiments before the lamps were adequate for commercial production.  In a letter to Edison in spring 1884, Francis Upton noted that the lamp factory had conducted 2,774 experiments (presumably since it had started operations in October 1881).

The source of the story about Edison trying thousands of experiments or materials is probably an 1890 interview in Harper's Monthly Magazine:

"'I speak without exaggeration when I say that I have constructed three thousand different theories in connection with the electric light, each one of them reasonable and apparently to be true.  Yet only in two cases did my experiments prove the truth of my theory.  My chief difficulty, as perhaps you know, was in constructing the carbon filament, the incandescence of which is the source of the light.  Every quarter of the globe was ransacked by my agents, and all sorts of the queerest materials were used, until finally the shred of bamboo now utilized was settled upon.  Even now,' Mr. Edison continued, 'I am still at work nearly every day on the lamp, and quite lately I have devised a method of supplying sufficient current to fifteen lamps with one horse-power.  Formerly ten lamps per horse-power was the extreme limit.'"

In this quote, Edison is not talking about the number of experiments but rather, theories more generally around electric lighting.  Edison had been working on electric lighting for over ten years by this time, and not the original research that led him to the bamboo filament lamp, which was completed in 1880.

Edison originally began his research with the platinum group of metals, but focused mainly on platinum and platinum-iridium.  He turned to carbon and experimented with some cotton threads, different kinds of paper and cardboard, various woods, and then with a few long fiber plant materials before settling on bamboo.  Later he had a worldwide search conducted to see if he could find a better long fiber plant as he did not hold the key patents on artificial fibers, which were beginning to prove better.  While Edison was in the electrical business, the Edison lamp continued to use a bamboo filament.

The thousands of experiments with different materials relates to Edison's later work on storage batteries.  Eventually Edison's battery experiments involved over 10,000 experiments with different chemicals and materials to develop his alkaline storage battery.  He never tried anywhere near that many materials in his inventive work on the light bulb.  The authorized biography by Frank Dyer and T. C. Martin, Edison: His Life and Inventions (the first edition of the book is 1910), quotes Edison's friend and associate Walter S. Mallory about these experiments:

"This [the research] had been going on more than five months, seven days a week, when I was called down to the laboratory to see him [Edison].  I found him at a bench about three feet wide and twelve feet long, on which there were hundreds of little test cells that had been made up by his corps of chemists and experimenters.  I then learned that he had thus made over nine thousand experiments in trying to devise this new type of storage battery, but had not produced a single thing that promised to solve the question.  In view of this immense amount of thought and labor, my sympathy got the better of my judgment, and I said: 'Isn't it a shame that with the tremendous amount of work you have done you haven't been able to get any results?'  Edison turned on me like a flash, and with a smile replied: 'Results!  Why, man, I have gotten lots of results!  I know several thousand things that won't work!'" 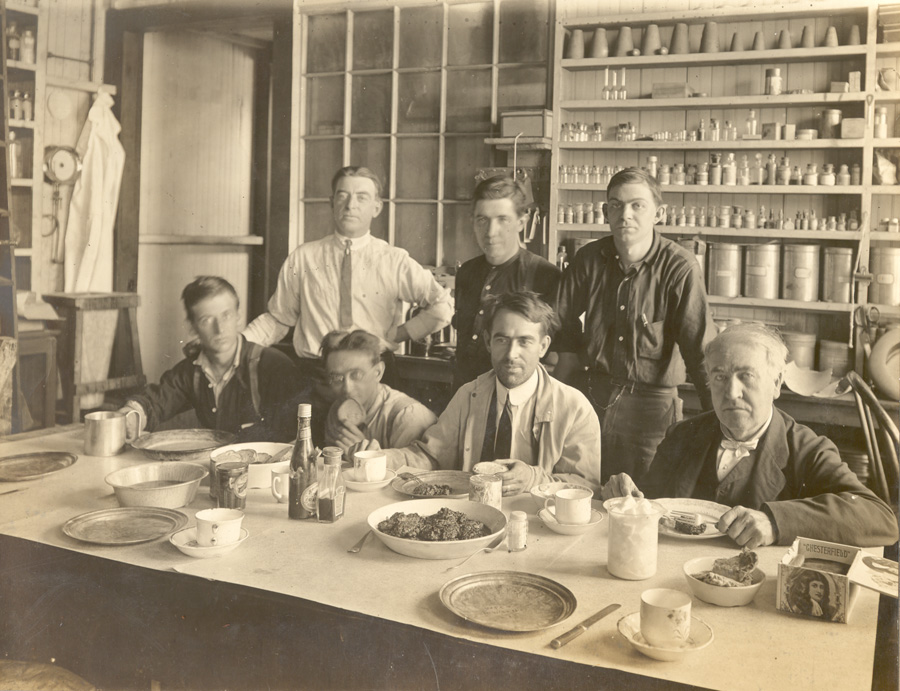 Edison was exclusively involved in war work from February 1917 until after the end of the war. During this period, members of Edison's experimental staff "the Insomnia Squad," which had been working night and day to bring a new phonograph to market, were pulled off phonograph work to help Edison develop acoustic technology for submarine detection. Read more...

You CAN help! Consider setting up a monthly or quarterly donation and sponsor this premier historical documentary editing project. Your contributions help keep the ongoing work of delving into the mind and life of one of the worlds greatest innovators moving forward!

Your donation is tax-deductible to the extent permitted by law. Please consider making a donation today?

Thank you for making a difference! 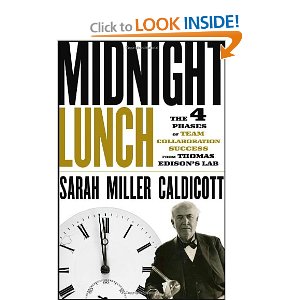 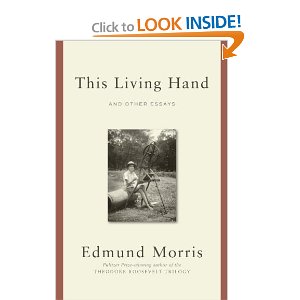 link to purchase these featured books!

This Living Hand: And Other Essays

Edmund Morris's latest book, This Living Hand: And Other Essays, includes his New York Times Book Review essay on Volume 7 of The Papers of Thomas A. Edison. The collection of essays features work spanning forty years of Morris' life as a writer.

Add Volume 7 Losses and Loyalties to your personal collection!

Purchase your copy of Volume 7 through our Amazon link and support the Edison Papers. Signed copies are available on a limited basis through our website. Contact us!