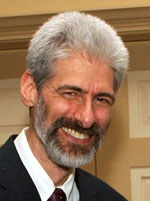 Paul Israel has made the study of American invention and innovation his specialty. A former Californian, Dr. Israel came East more than three decades ago to do research for a book on Thomas Edison and the electric light. After he joined the staff of the Edison Papers, he earned his Ph.D. in history from Rutgers, the State University of New Jersey. Today he is the Director and General Editor of the Thomas A. Edison Papers at Rutgers.

The Edison Papers provides leadership in publishing and developing the documentary legacy of America’s most prolific inventor and innovator. The documents include the writings, drawings, and business records of Edison. To date the project has produced eight volumes of The Papers of Thomas A. Edison as well as an online edition with about 150,000 documents. The Edison Papers are also working to advance the Edisonian legacy through interdisciplinary initiatives in young and higher education. In 2005 the Edison Papers received a special retrospective Eugene S. Ferguson Prize from the Society for the History of Technology (SHOT) as an outstanding and original reference works that will support future scholarship in the history of technology. This unique retrospective award was given to the Edison Papers as a model work published since the founding of SHOT in 1958.

In 2000, SHOT awarded Dr. Israel the prestigious Edelstein [Dexter] Prize for Edison: A Life of Invention (John Wiley & Sons, 1998). In the book, Israel shows how Edison transformed invention into a modern process of innovation by carefully managing his inventions, overseeing their market uses, and involving himself in profits and promotions. His other books include From Machine Shop to Industrial Laboratory: Telegraphy and the Changing Context of American Invention, 1830-1920 (Johns Hopkins University Press, 1992) and Edison's Electric Light: The Art of Invention (Johns Hopkins University Press, 2010; published as Edison's Electric Light: Biography of an Invention by Rutgers University Press, 1986), written with Robert Friedel. In these works and in numerous articles and papers he has been examining technological creativity, the origins of modern innovation, technological enterprise, patent regimes, and the intersections between science, technology, and business.

Dr. Israel is a frequent consultant and contributor to projects seeking material about Edison and invention, including over forty television and radio documentaries. He has also been involved in developing or revising exhibits and interpretive programs at several museums and historic sites, including the Smithsonian Institution’s National Museum of American History, the Thomas Edison National Historical Park, and the Thomas Edison Center at Menlo Park. In addition, he has given numerous public lectures on Edison. Dr. Israel also teaches graduate and undergraduate courses in the history of technology and innovation.