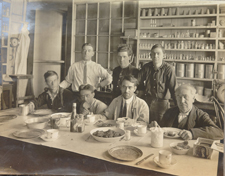 From Phonographs to U-Boats: Edison and His “Insomnia Squad” in Peace and War, 1911-1919 by Thomas E. Jeffrey is the guide to Part V of the microfilm edition of the Thomas A. Edison Papers. An important work of scholarship in its own right, this groundbreaking book probes an important period in Edison’s life that has received little attention in previous scholarly works. This book reveals a great deal about the inventor’s personality and methods and shows his deep personal involvement in the war effort. From Phonographs to U-Boats also includes two extended essays on how the war affected Edison’s experimental work, business enterprises, and family.

“The ‘Insomnia Squad’: Thomas A. Edison’s Laboratory and Wartime Research Staff,”  looks at   the origins of the fabled “Insomnia Squad” and Edison’s direct role in trying to develop new technologies for the U.S. Navy. Edison was exclusively involved in war work from February 1917 until well after the end of the war. During this period, members of Edison’s experimental staff, who had been working to bring his new disc phonograph to market, were pulled off phonograph work to help Edison develop acoustic technology for submarine detection. The essay examines the connection between Edison’s work on phonographs and his submarine detection experiments.

A section entitled “Enemy at the Gate: Edison’s Foreign-Born Employees during the War” reveals the awkward situation of Edison’s numerous foreign-born employees, many of whom legally became “alien enemies” after the United States entered the war. Another section entitled “Did George Washington Carver Really Turn Down a Job Offer from Edison?” provides a conclusive answer to a question that has baffled biographers of Edison and Carver alike.

“Thomas A. Edison’s Management Team,” tells the story of the innovations introduced by Charles Edison and reveals the importance of the years 1911–1919 for Edison’s companies. Having immersed himself in war work, Edison turned over control of his many business concerns to his son Charles, who instituted a more enlightened policy toward Edison’s workers. During these years, Charles Edison, as chairman of the board of Thomas A. Edison, Inc., and Mark Jones, as manager of the Personnel Service Department, transformed Edison’s enterprises “from that of the last place at which men desired to work to that of the first place.”

At war’s end, however, Thomas A. Edison reasserted control, chiefly in response to the economic downturn of 1920-21. As Charles Edison recalled later, “he virtually relieved me of the responsibility and took over for himself.” Thomas also ordered drastic cuts, which, said Charles, “almost broke my heart.” In just six months, the elder Edison had ruthlessly fired 90 percent of the workforce and laid off many of the top-level managers that his son had brought in.

In addition to describing a previously unexplored period in Edison’s life, From Phonographs to U-Boats provides the first accurate account of Edison’s ancestry, correcting errors that have appeared in previous biographies, from the first “official” biography in 1910 to the present day. The value of the book is further enhanced by biographical sketches of 350 employees, managers, and family members. Other features include an annotated list of over fifty companies affiliated with Edison Industries and an extensive chronology. A special section of the chronology entitled “Mr. Edison Takes a Vacation” contains a detailed account of the Edison family’s European tour of 1911 as well as a discussion of the inventor’s famous camping trips with Henry Ford, Harvey Firestone, and John Burroughs.

A signed copy of this book can be obtained from the Edison Papers for donation of $50.