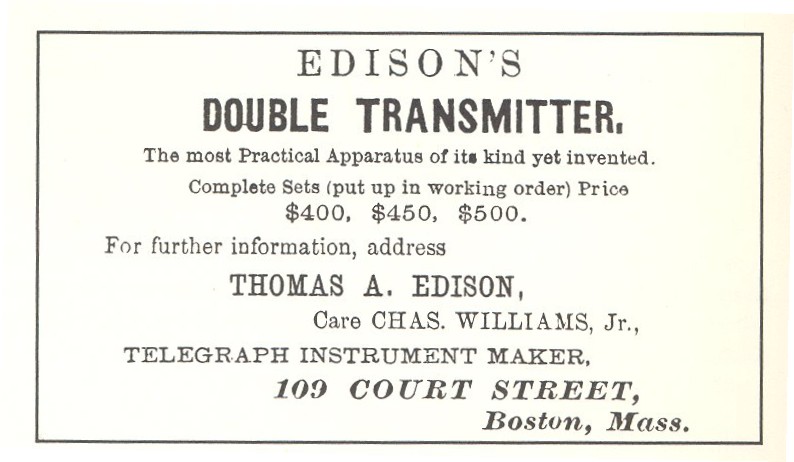 In the spring of 1869, Edison decided to move from Boston to New York in order to test another invention, his double transmitter for sending two messages over one wire. During the tests, which were only partially successful, Edison found it necessary to modify his instruments, but was delayed "on account of piling up of jobs at the instrument makers."

The move to New York was one of the most momentous of Edison’s career. New York was the epicenter of the telegraph industry in the United States. It was the headquarters of Western Union, which was on its way to becoming the nation's leading telegraph company, and also of the Gold & Stock Telegraph Company, which first established stock ticker service at the New York Stock Exchange and was also becoming a dominant force in transmitting prices from the gold and various commodity exchanges across the country. In contrast to his conservative Bostonian investors, Edison found that New Yorkers were willing to spend money to develop new technology. In New York, he thought he could make the money he needed to continue his telegraph research, as he explained in a letter to an associate.

Within a few months of his move to New York City, Edison landed a position as superintendent of Law's Gold and Stock Reporting Co. His new job provided some security and also the wherewithal to continue to improve the printing telegraph he had developed in Boston. In the fall of 1869, the Gold and Stock Telegraph Co. bought out the Law's company and dismissed Edison as superintendent. Undaunted, he formed an electrical engineering business with Franklin Pope and James Ashley, who had replaced Pope as editor of the Telegrapher. Pope, Edison & Co. offered an array of electrical engineering and telegraphic services, as can be seen in the company's advertisement in the Telegrapher.