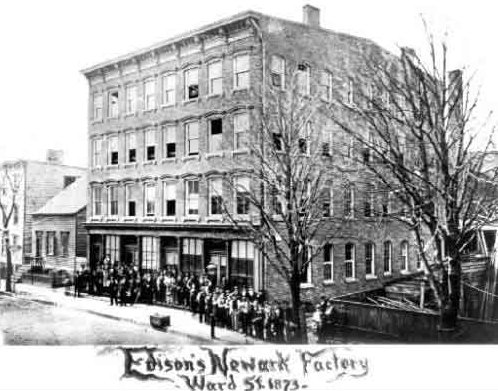 In February 1870, Edison signed his first contract to do inventive work for Gold & Stock. In addition to his salary, two investors in the Gold & Stock supported Edison's work on his autographic telegraph and provided him with the seed money to rent a room and furnish it with all necessary tools and apparatus. This was all he needed to open his own shop, the Newark Telegraph Works, with machinist William Unger. Previous experience had taught him that any agreements he made to work on inventions for businesses needed to include funding for a shop to carry out experimental and design work. In May 1871, Western Union took over Gold & Stock, which signed Edison to a new five-year contract as "consulting Electrician and Mechanician" at a salary of $2,000 per year and acquired rights to his Universal stock printer, which became the industry standard.

In 1870, Edison began work for the newly formed Automatic Telegraph Co. The automatic telegraph employed machinery to record incoming messages at a faster rate than Morse operators could achieve. To enable Edison’s experimental work, one of the company’s investors provided funding for a second telegraph manufacturing shop in Newark known as the American Telegraph Works. In a letter to his parents Edison described himself as a "Bloated Eastern Manufacturer" with "one shop that employs 18 men" and another "which will employ over 150 men." In 1873, Edison would consolidate all of his shops in a four-story building located on Ward Street in Newark.