In the early years at Menlo Park, Edison was involved in all the ongoing research and projects.  As Edison recalled in one testimony (p. 39) "Suggestions generally came from me.  If any change was to be made, my assistants would speak to me about it, and if I thought best the change was made."  Edison’s methods were described by the New York Herald of January 17, 1879:

Edison himself flits about, first to one bench, then to another, examining here, instructing there; at one place drawing out new fancied designs, at another earnestly watching the progress of some experiment.  Sometimes he hastily leaves the busy throng of workmen and for an hour or more is seen by no one.  Where he is the general body of assistants do not know or ask, but his few principal men are aware that in a quiet corner upstairs in the old workshop, with a single light to dispel the darkness around, sits the inventor, with pencils and paper, drawing, figuring, pondering.  In these moments he is rarely disturbed.  If any important question of construction arises on which his advice is necessary the workmen wait.  Sometimes they wait for hours in idleness, but at the laboratory such idleness is considered far more profitable than any interference with the inventor while he is in the throes of invention.

Francis Upton wrote his father about Edison's central role in the lab: "One thing is quite noticeable here that the work is only a few days behind Mr. Edison, for when he was sick the shop was shut evenings as the work was wanting to keep the men busy."

Once the workforce grew to around sixty employees, Edison could no longer afford the time or expense of keeping his staff idle while they waited for his directions.  He learned to subdivide the work, assigning each detail of the system to a particular staff member or a team of researchers and machinists.  Although Edison provided initial guidance and suggestions on how to approach each problem, the experimenters were often allowed, and indeed encouraged, to find their own way to a solution. He later testified (p. 50) :  "I generally instructed them on the general idea of what I wanted carried out, and when I came across an assistant who was in any way ingenious, I sometimes refused to help him out in his experiments, telling him to see if he could not work it out himself, so as to encourage him."

Wilson Howell was assigned the task of devising an insulation for the underground cables, and his was atypical experience at Edison’s Menlo Park. "Mr. Edison sent me to his library and instructed me to read up on the subject of insulation, offering me the services of Dr. [Otto] Moses to translate any French or German authorities which I wished to consult.  After two weeks search, I came out of the library with a list of materials which we might try.  I was given carte blanche to order these materials. . . . and, within ten days, I had Dr. Moses' laboratory entirely taken up with small kettles in which I boiled up a variety of insulating compounds. . . . Of course there were many failures, the partial successes pointing the direction for better trials." 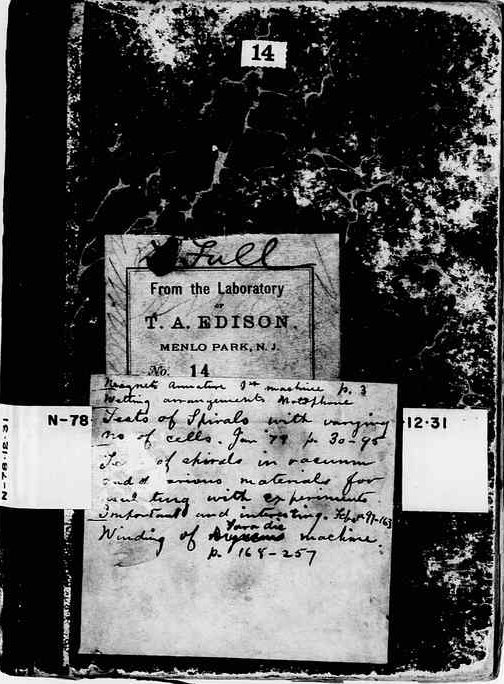 As they gained experience and Edison's trust in their abilities, men like Howell were given greater responsibilities and wages.

Edison required his staff to keep careful records of each experiment.  In Edison’s Newark shops Edison recalled, "drawings were made on all sorts of scraps of paper and thrown in a drawer," but after establishing his laboratory at Menlo Park he "commenced the practice of placing note books all over my laboratory, 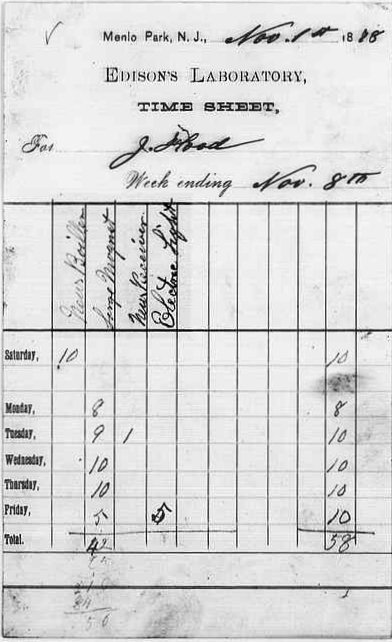 with order to my assistants to draw out and sign every experiment."  As he subdivided the work in 1880, certain books were assigned to a particular project or test series.  As the scale and scope of the work expanded, Edison also found it useful to have a member of his office staff (which now numbered six) keep a daily record of work in the laboratory so he could easily follow the progress of each project.  Edison required his bookkeepers to maintain careful records of the labor, material, and other experimental costs incurred by each project.  Each employee was required to fill out a timesheet showing how many hours he had worked on each project so Edison could charge these costs to the Edison Electric Light Company, Western Union, or other financial backers.