Edison briefly experimented with electric lighting in 1877 but he did not begin to focus his attention on the subject until George Barker, physics professor at the University of Pennsylvania, invited him to see the arc light system developed by William Wallace and Moses Farmer at Wallace’s shop in Connecticut. According to the New York Sun reporter who accompanied him on the visit, "Edison was enraptured.  He fairly gloated over it. . . . He ran from the instruments to the lights, and from the lights back to the instrument.  He sprawled over a table with the simplicity of a child, and made all kinds of calculations.  He estimated the power of the instrument and of the lights, the probable loss of power in transmission, the amount of coal the instrument would save in a day, a week, a month, a year, and the result of such saving on manufacturing."

A week later the Sun published Edison’s plans to develop a complete electric lighting system to replace gaslight in lower Manhattan.  He would generate electricity using fifteen or twenty Wallace dynamos run by a 500-horsepower engine and distribute it through underground mains similar to those carrying gas. He would use existing gas pipes to carry his electric wires through buildings and place his lamps in converted gas fixtures.  Customers would be charged by a meter similar to those employed by gas companies.  The use of gas lighting as a model helped Edison determine more than a market for his electrical system, it also affected his technical designs as he sought to make it resemble the older lighting system he planned to replace.

Edison did not provide the details of  his proposed system to the Sun reporter but his early notes and patent caveats indicate that he believed the solution to the problem of "subdividing the light" lay in developing a thermal regulator to prevent the incandescing element of his lamp from melting.  Edison reached this conclusion by thinking of electric lights as analogous to telegraph instruments and treating the lamp regulator as a form of electromechanical switch similar to those he used in multiple telegraph designs.  Having arrived at this solution, Edison began designing lamp regulators in the same fertile manner by which he had previously varied the relays and circuits of his telegraph designs.  His first electric light patent caveat describes "devices whereby the heat arising from the passage of [the] current is utilized to regulate the temperature of the incandescent metal which serves to give the light so that it is never allowed to reach its melting point no matter how strong a current attempts to pass through." 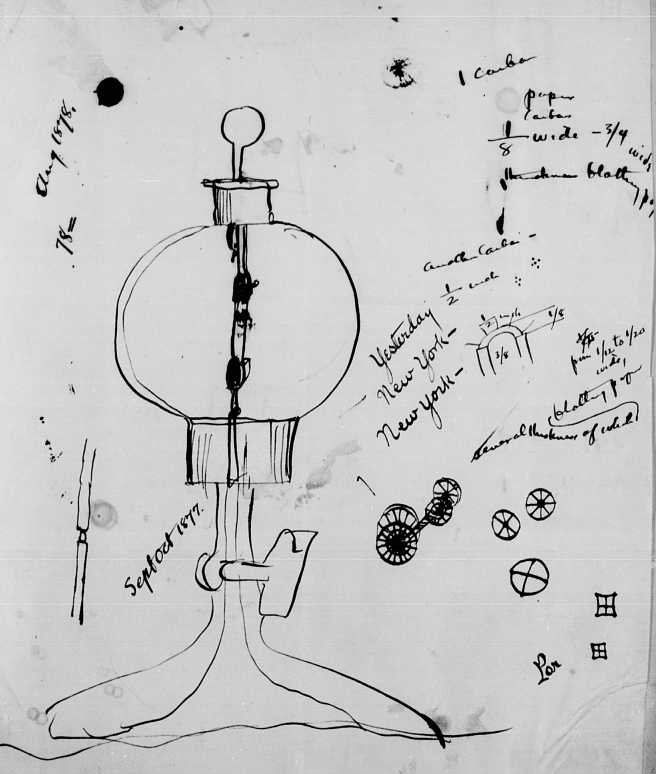 Another key element of Edison’s system was his insight regarding the relationship between high resistance lamps and parallel circuits.  Because the regulator temporarily removed the lamp from the circuit, he had to place the lamps in parallel circuits so that each individual lamp could be turned on and off without affecting any others in the circuit.  This was also desirable for customers used to independently operated gas lamps.  As early as November 1877, Edison had determined that high resistance lamps were best suited for parallel circuits.  When he realized that this arrangement provided the best economy is unclear, but the cost benefits were certainly well understood in the laboratory by the following November when Charles Batchelor wrote of a competing design that it "would want enormous large conductors owing to [the] small resistance" in each lamp."

Edison's ideas regarding lamp resistance grew out of his understanding of basic electrical laws.  He knew that in order to reduce energy lost as excess heat in his distribution system it would be necessary to increase the cross section of his copper conductors but that this would raise their cost and make the system uneconomical.  However, he could reduce the size of the conductors by increasing the voltage proportionately to the current.  This in turn would require him to use high resistance lamps.