On July 17, 1877, Edison was thinking about recording telephone messages.  Edison was thinking of the telephone as a "speaking telegraph." He therefore envisioned using a recorder similar to the embossing recorder-repeater he was developing for Western Union.  Still reflecting on this idea the following day, after a seriesof telephone experiments, he tried "a diaphragm having an embossing point & held against paraffin paper moving rapidly."  Finding that the sound "vibrations are indented nicely" he concluded "theres no doubt that I shall be able to store up & reproduce automatically at any future time the human voice perfectly."

Though Edison put aside this extraordinary idea in order to push ahead on his telephone, he returned to it time and again over the next six months.  In early August, at the end of a letter to Edison describing a telephone exhibit, Edward Johnson remarked that he had astounded his audience by describing what Edison "proposed to do in the way of recording speech."  A week later, Edison labeled the speech recorder he had drawn in his notebook, and which looked very much like an automatic telegraph recorder, the "Phonograph."  A few days later he discussed methods of recording on paper with "my apparatus for recording & reproducing the human voice."  He also described how it would work as a telephone recorder.  Edison drafted an informal press release to announce the new invention on September 7 even though he felt that the phonograph was not yet ready for the public and he decided not to publish it.

The telephone took all of Edison's time during the rest of September and October, so it wasnt until early November the started working with the phonograph again.  The phonograph he sketched on November 1 still looked very much like an automatic telegraph and still recorded on paper tape.  Edison was finally willing to publish the text of his September press release as a letter from Edward Johnson to the editor of Scientific American.  Nonetheless, Edison was clearly not satisfied with the paper-tape recorder and was beginning to develop a different design that drew on an alternative embossing recorder-repeater he had experimented with the previous summer.  On November 10, Edison sketched a drawing of a lathe-like device with a hand crank that 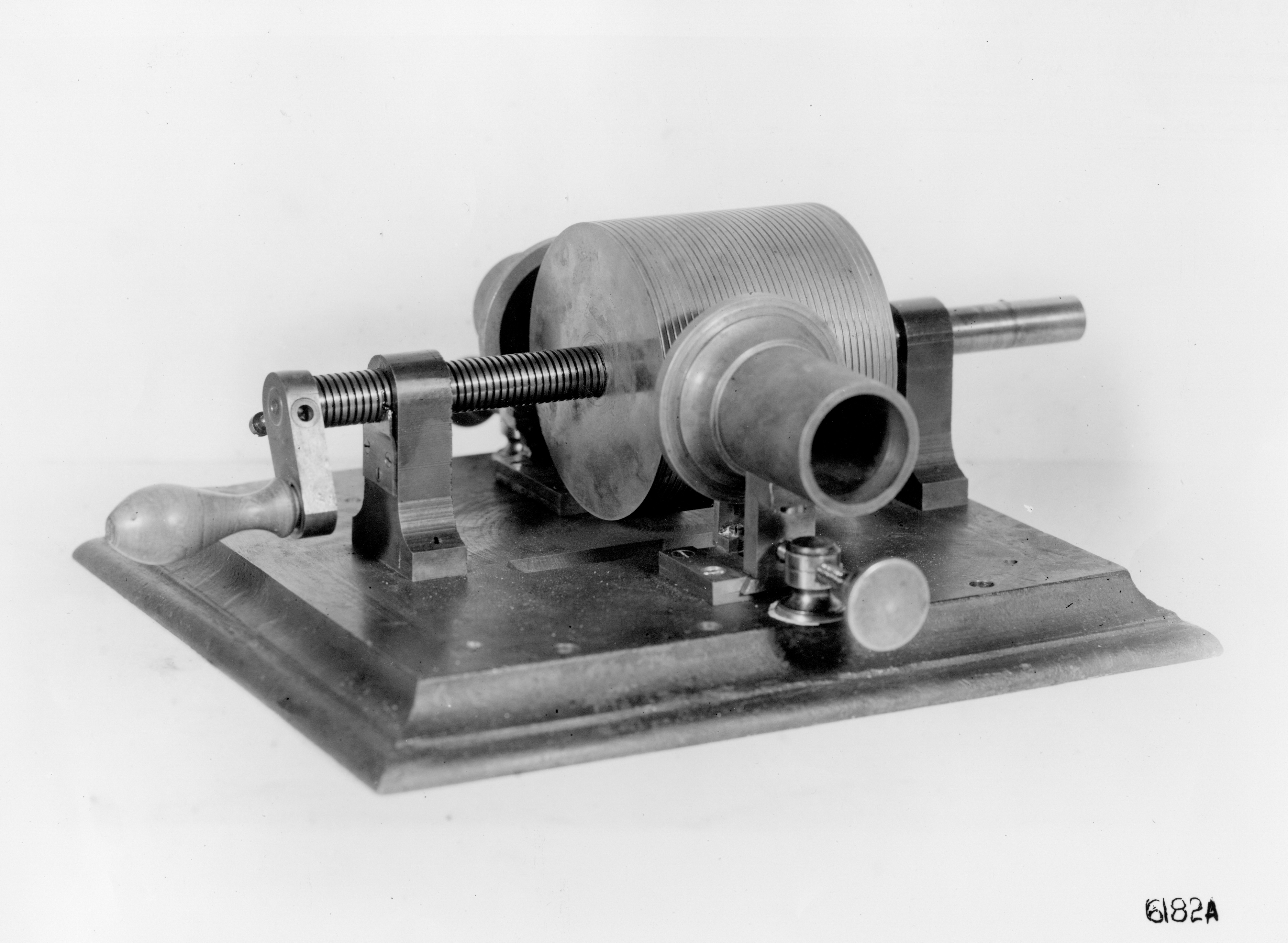 turned a large, grooved cylinder mounted on a long shaft with a screw pitch of ten threads per inch.  Instead of paraffined paper, Edison sketched a piece of tin foil wrapped around the cylinder as a recording surface.  By the end of the month Edison was satisfied with this design and set machinist John Kruesi to work making the instrument.  The phonograph that Kruesi built during the first six days of December astounded Edison and his associates by working the first time they tried it!

The day after it was finished Edison, accompanied by Batchelor and Johnson, took the new cylinder phonograph to the New York offices of Scientific American.  There he amazed the staff by placing the little machine on the editor's desk and turning the handle to reproduce a recording he had already made.  According to the journal's editor, "the machine inquired as to our health, asked how we liked the phonograph, informed us that it was very well, and bid us a cordial good night.  These remarks were not only perfectly audible to ourselves, but to a dozen or more persons gathered around, and they were produced by the aid of no other mechanism than the simple little contrivance explained and illustrated below."

By the New Year, Edison had an improved phonograph and he exhibited the talking machine at Western Union headquarters, where it attracted the attention of the New York newspapers.