Automatic telegraphs used machinery to transmit messages at higher speeds than those sent and received by Morse telegraph operators. Hand operators averaged 25-40 words per minute while the transmission speeds of automatic telegraphs ranged from 60-120 words per minute for the ink recording automatic telegraphs used in England to 500-1000 words per minute for Edison's chemical recording system. However, even though transmission speeds were much higher with automatic telegraphs, individual messages took longer to prepare for transmission and delivery. Automatic telegraphs were most economical for long messages, such as the news reports sent by the Associated Press. The more common short business and personal messages sent by telegraph were transmitted more economically by hand operators, because they could send the message from the original form submitted by the customer, and they translated the Morse code directly into a final message as they received it. Automatic messages needed to be translated into perforated tape before they could be run through a transmitter, and at the other end, the message had to transcribed from the recorded Morse code before it could be delivered to the customer. 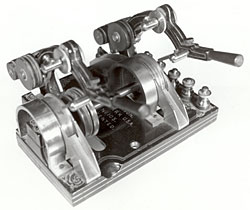 Edison worked on automatic telegraphs between 1870 and 1874. He first developed an improved perforator with a keyboard similar to that of a typewriter that operated at about 35 words per minute. The punched tape produced holes corresponding to either dots or dashes of the Morse code; the dashes were larger and produced a longer signal. The perforated tape was then run through a high-speed transmitter at speeds as high as 1,000 words per minute. As the perforations passed rapidly under a metal stylus, the stylus would make electrical contact with a revolving drum, thus closing the circuit. This caused a series of rapid, intermittent signals to be transmitted to an automatic receiver at the other end of the line. At the receiving end, the signals produced an electric discharge that passed through a metal stylus into specially treated chemical recording paper, which caused the chemicals to decompose and leave a long or short mark representing the dashes and dots of the Morse code. After the message was received, it then had to be translated from Morse code and the final message prepared for delivery. Edison devised a printer for message preparation that was an early form of typewriter. He also tried unsuccessfully to develop an automatic telegraph that sent and received messages in Roman letters. Edison's automatic telegraph system was used between 1872 and 1874 on the lines of the Automatic Telegraph Company and then for another two years on the lines of Atlantic and Pacific Telegraph Company after that company gained control of Automatic Telegraph.