While attempting to develop his ore milling process to concentrate low-grade iron ore, Edison found that he could sell the waste sand to cement manufacturers. In 1899, he decided to investigate how he might transfer his rock-crushing technology to the production of Portland cement. During the next few years, Edison made other improvements in cement manufacture, the most important of which was a long rotary kiln that he licensed to other manufacturers, as well as using at the automated plant he built in Stewartsville, New Jersey. The kiln helped lead to overproduction in the industry and the Edison cement plant was never very profitable. Edison Portland cement was used extensively for buildings, roads, dams, and other structures, including Yankee Stadium. Edison also designed a system for building inexpensive cement houses that he planned to license to other manufacturers. Only a few of these were ever built. 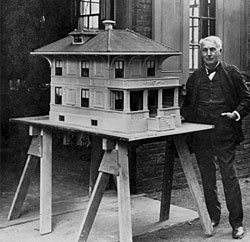 Yankee Stadium Made with Edison Cement

The closing of Yankee Stadium at the end of the 2008 baseball season also brought to a close a chapter in Edison history.   The Edison Portland Cement Co. provided the concrete for the original 1923 stadium, a concrete so “hard and durable,” says sportswriter Tom Verducci in a recent Sports Illustrated piece, that New York City decided “not to touch it” during the 1973-74 renovation.

Edison’s technical innovations in the cement industry are a little-known aspect of his career.  They were an outgrowth of the waste sand his ore-milling business produced.  The inventor took note that the sand produced in this way allowed for the manufacture of a harder and more durable cement.  From 1898 to 1902, he developed new cement-processing technologies, including a giant rotary kiln, which eventually allowed the Edison company to increase production and realize cost-savings.