Edison first attempted to develop a disc phonograph in 1878. However, it was Emile Berliner rather than Edison who developed a commercial disc machine. The Victor Talking Machine Company marketed the disc phonograph, and its sales began to surpass those of the Edison cylinder by 1907. Disc records were longer playing and easier to store, but Edison resisted them because of his belief that cylinder recordings produced superior sound.

When Edison did turn to the development of disc technology around 1910, he focused on developing a higher-quality record surface and on recording and reproducing music with greater fidelity. While Edison's disc phonograph and records were technically superior they were incompatible with competitors machines. In addition, Edison failed to adapt to the market for popular singers and insisted on recording only those whose voice he personally considered superior. As a consequence, the Edison phonograph business never returned to its former prominence and went out of the phonograph business in 1929. 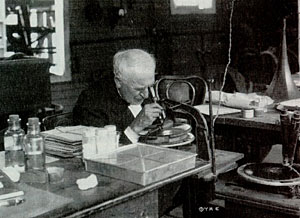