In the fall of 1878, after experiments indicated that existing arc light generators were inefficient for incandescent lighting Edison and his chief assistants, Charles Batchelor and Francis Upton, investigated generator design and the principles of electromagnetism. During the first months of 1879, Edison designed a dynamo that differed in important ways from contemporary designs. Many contemporary electrical experts thought a generator would work best when its internal electrical resistance was equal to the external resistance of the circuit. This view was based on the understanding that the maximum power output for any given battery occurred when its internal resistance matched that of the rest of the circuit. Generators with equal internal and external resistance generated maximum current, but because Edison considered the economic efficiency of his system to be related to the number of lamps per horsepower, he determined that a generator with a small internal resistance would produce more efficient power output. 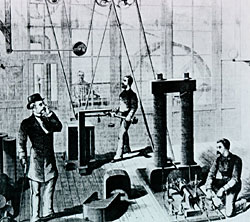 The other key feature of the Edison dynamo was its large bipolar magnets, which gave the generator its nickname, the "long-legged Mary-Ann" (a somewhat rude joke among the all-male laboratory staff). In arriving at this design, Edison drew in part on Michael Faraday's half-century-old work regarding the electromagnetic generation of current by a conductor (the armature) moving through the magnetic lines of force generated by a field magnet. Understanding that the more lines of force crossed in the most direct manner, the more productive the generator, Edison apparently conceived his large magnets as a concentrated source of Faraday's lines of magnetic force. However, John Hopkinson later demonstrated that such large electromagnets were inefficient.