When Edison began working on electric lighting in September 1878, he made his lamps with platinum wire filaments because the metal had a high melting point. However, in January 1879 he conducted basic research on the heating of platinum that showed air was absorbed into its pores as it was heating, thus weakening the metal and causing it to melt at lower temperatures. Edison even gave a paper on his research to the American Association for the Advancement of Science.  To overcome this problem Edison placed the metal filament in a vacuum bulb.

While using a vacuum improved the performance of Edison’s lamps they were still too expensive for the electrical system he was designing. Not only was platinum a very expensive metal, but it also had a low resistance to the electric current. This meant that his distribution system would need large and expensive copper-wire conductors. Unlike many of his contemporaries in the scientific and technical communities, Edison realized that Ohm's and Joule's laws required that a system of incandescent lighting use high-resistance lamps of at least 100 ohms in order to reduce the size and thus cost of copper conductors. 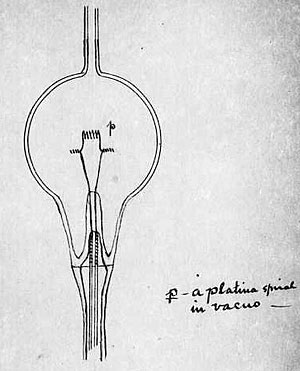 Because Edison had developed such a good vacuum lamp, he was able to turn to carbon, which naturally had high resistance but would burn up too rapidly in the atmosphere.  On 21-22 October 1879, Edison and his staff conducted their first successful experiments with a carbon-filament lamp in a vacuum. The filament was made from a piece of carbonized thread.  The first newspaper account of his successful carbon lamp describes the "eureka" moment when Edison realized he could make carbon into a wire-like filament by using lampblack, the same material he used in his telephone transmitter.

Sitting one night in his laboratory reflecting on some of the unfinished details, Edison began abstractedly rolling between his fingers a piece of compressed lampblack until it had become a slender thread. Happening to glance at it the idea occurred to him that it might give good results as a burner if made incandescent. A few minutes later the experiment was tried, and to the inventor's gratification, satisfactory, although not surprising results were obtained. Further experiments were made, with altered forms and composition of the substance, each experiment demonstrating that the inventor was upon the right track. 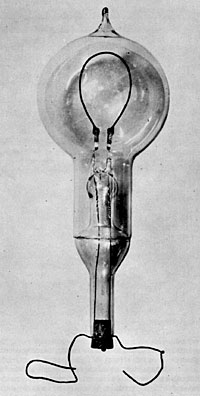 By the beginning of the New Year, Edison was showing his lamp to crowds of visitors who flocked to Menlo Park. As the New York Herald reported on New Year’s Day, "Extra trains were run from east and west, and notwithstanding the stormy weather, hundreds of persons availed themselves of the privilege.  The laboratory was brilliantly illuminated with twenty-five lamps, the office and counting room with eight, and twenty others were distributed in the street leading to the depot and in some of the adjoining houses.  The entire system was explained in detail by Edison and his assistants, and the light was subjected top a variety of tests."  The front page of the New York Daily Graphic depicted the demonstrations.

The lamp used during the New Year demonstrations used carbonized cardboard filaments in the shape of a horseshoe.  While cardboard had proved sufficient for demonstration purposes it had serious defects the made it impractical for use in a commercial lamp.  As one of his assistants later recounted, Edison discovered that "Paper is no good.  Under the microscope it appears like a lot of sticks thrown together.  There are places where the fibres are packed and other places where there are few fibres, dense spots and great open holes."  If carbon was the solution, he still needed to find the best form of it.  In typical Edisonian fashion he told his staff, "Now I believe that somewhere in God Almighty's workshop there is a vegetable growth with geometrically parallel fibres suitable to our use.  Look for it.  Paper is man made and not good for filaments."  Edison assigned one of his chemists, Dr. Otto Moses, to make a systematic study of the literature on carbon substances which helped to guide the research.  Experiments soon focused on grasses and canes such as hemp, palmetto, and bamboo which possessed long, uniform fibers that would make for a sturdy long-lasting filament.  Bamboo turned out to be the best material for the commercial lamp.