In order to develop a successful incandescent lamp, Edison had to design an entire electrical system, which he modeled after the gas lighting systems used in large cities. Gas systems included central stations, underground conductors, meters, and lamp fixtures. In addition to these components, Edison also had to design an electrical generator and the network it powered. He also planned to sell power to balance the load at his central station during the day when fewer lights were used. In order to do this, he had to design electric motors and he even experimented with an electric railway. In addition, he also had to develop the screw socket to hold his lamps in the fixtures and fuses to prevent electrical overloads and fires. 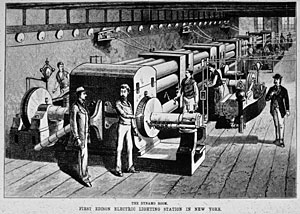 Edison installed his first permanent central station on Pearl Street in lower Manhattan. He designed special "jumbo" dynamos for the station. The district included Wall Street and many of the New York newspapers. Before installing the station, he canvassed the district he planned to light to find out how many gas and kerosene lamps were used and how much machinery could be powered by his electric motors. 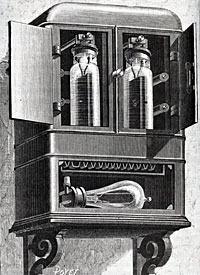 Edison designed a direct-current system that was most efficient for densely populated urban centers and for isolated plants providing power to a single building. His system was most efficient and economical within a square mile of the central station. While Edison was able to increase the distance over which his system could be used by the addition of a third neutral wire, his system faced increasing competition by the mid-1880s from alternating current, which used more efficient high voltage transmission over long distances that were then transformed to safer voltages for consumer use. Edison refused to develop an alternating current system due to his belief that high voltages were inherently unsafe, a view that was reinforced by his personal and financial investment in direct current technology. Edison's efforts to demonstrate the dangers of high current included experiments on the electrocution of animals and the development of the electric chair as a more humane form of execution. By the time Edison's company forced him to develop an alternating current system in 1891, it was too late, and in February 1892, the Edison company was merged into General Electric, and Edison left the industry he had helped to found. 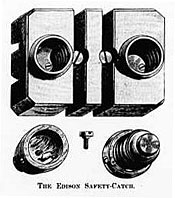