In 1879 Edison developed a new receiver to compete with Bell's. By the end of the year American Bell had acquired Western Union's telephone business and Edison's new receiver found its primary market in Great Britain. Edison's new receiver was based on his 1874 discovery of the electromotograph principle—a change in friction caused by electrochemical decomposition. In the spring of 1877 Edison had devised a telephone receiver employing this principle in which the varying electric signal made the sounding diaphragm vibrate by changing the friction between a metallic contact arm and a chemically treated moving surface. In the final version the surface was a chalk composition. He then revived the idea in June 1878 in an effort to get around Alexander Graham Bell's basic patent on an electromagnetic telephone receiver. Edison sent the first demonstration models to London in February 1879, and by July, he had developed a commercial design. The telephones sent to Britain combined both the carbon-button transmitter and electromotograph receiver. 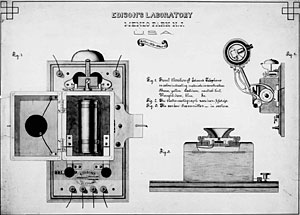 Edison called his 1877 receiver a musical telephone because it was loud enough to broadcast music sent by his carbon-button telephone transmitter throughout a large auditorium. After the new instruments arrived in London in 1879, Edison's agent began calling them "The Edison Loud-Speaking Telephone." After the Bell and Edison telephone interests merged in Britain in 1881, the Bell receiver was retained because it was cheaper and easier to use. 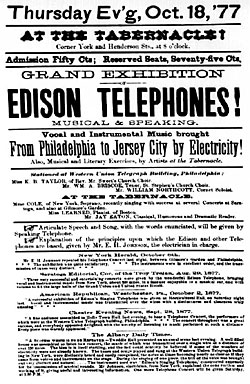