During the 1890s, Edison tried to develop a method for concentrating low-grade iron ore into high-grade briquettes suitable for use in Eastern steel mills. Edison had developed an electromagnetic ore separator in 1880 while working on electric light and power. In this device, sand from tailings or crushed rock was poured through a hopper so that it fell in a thin, broad stream in front of an electromagnet that attracted magnetic particles, such as iron, into one receptacle while non-magnetic particles fell straight through into another bin. His first ore venture involved the concentration of iron found in black sand during the early 1880s, but his more important effort took place between 1887 and 1898 when he designed a whole system of mining, crushing, separating, and concentrating the ore into briquettes at a mine in northern New Jersey. After pouring over $2 million of his own money into this venture, Edison was forced to abandon it when the discovery of large iron ore deposits in the Great Lake region made Edison's concentrated low-grade ore too expensive for steel mills. Edison was able to recoup part of his investment by transferring his rock crushing technology to the production of Portland cement. 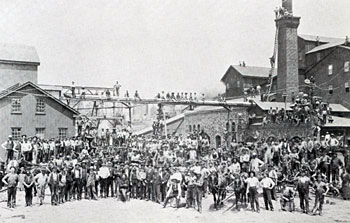