The common approach to diplex was the use of weak and strong batteries to produce signals of different strengths, with relays at the receiving end designed to respond to one or the other signal. However, it proved difficult in practice to prevent the sensitive weak-signal relay from responding to the stronger signal current. Edison tried a different approach that used a common element in many of his designs—the polarized relay. He continued to use one receiver with a common, or neutral, relay that responded only to changes in current strength but employed a second receiver with a polarized relay to respond to changes in the polarity of the current.

The use of current reversals, however, presented a new problem. At the moment of reversal, a momentary drop in current strength caused the common relay to lose its magnetism just as it was supposed to act, thus mutilating the signal and causing false breaks. Rather than trying to prevent the moment of no magnetism, Edison decided to isolate the effect electromechanically so that it would not interfere with the signal. He did this by means of what he called a "bug trap." Instead of preventing the neutral relay from releasing when the current fell to zero during the moment of reversal, he used it to work a local relay interposed between it and the sounder relay. This local relay was adjusted so that it responded sluggishly to the signal, and thus failed to act before the neutral relay regained its magnetism and acted on the sounder relay. In essence, Edison used a cascade of electromagnets to bridge over the time during which the reversed current regenerated the magnetic field in the main relay magnet. This solution represented an important approach that Edison often took when confronted by particularly intractable problems - rather than completely eliminate a defect he found a way to use its own effects to obviate the problem.

The quadruplex was Edison's most important telegraph invention. It enabled Western Union to save money by greatly increasing the number of messages the company could send without building new lines. It also allowed the company to use its existing lines more efficiently to meet seasonal increases in message traffic and to lease excess capacity for private lines. The quadruplex continued to be used into the twentieth century. 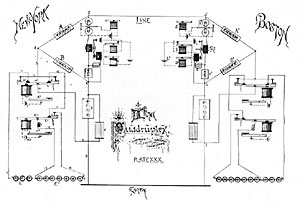