Edison did not invent the stock ticker. The credit for that invention goes to Edward Calahan who devised the first stock ticker in 1867 for the Gold and Stock Telegraph Company in New York. Edison developed his Universal Stock Printer in 1871 for Gold and Stock, which soon became a subsidiary of Western Union. Edison's improved stock ticker included his key contributions to printing telegraphy. His most significant improvement was a mechanism that enabled all of the tickers on a line to be synchronized so that they printed the same information. Because the printers frequently fell behind the transmitter by one or more letters, exchange companies had to send employees to the offices where printers were running out of "unison" to reset them. This led to the development of automatic mechanical means to solve the problem. 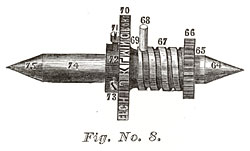 One of the most effective and longest used devices was Edison's screw-thread unison. With Edison's device the transmitting operator could bring all the printers on a line into unison by sending electrical impulses to turn the shaft of each machine until a peg sitting in a screw-thread on the typewheel hit a stop. Edison also designed an improved typewheel-shifting mechanism and a paper feed so that his ticker required much less battery power. Edison also devised a transmitter for his stock ticker that used a keyboard like that of a typewriter. Edison's ticker was used on the stock exchange for several years before being replaced, but it continued to be used until about 1960 for many other purposes, including the transmission of sports scores. 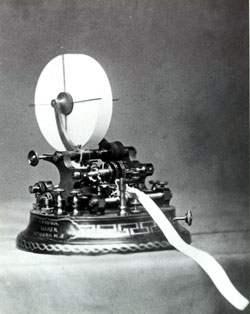