During the first decade of the twentieth century, Edison spent much of his time developing a storage battery that he intended for use in electric automobiles. Edison had a long-standing interest in battery design dating back to his time as a telegraph inventor. He was among the first to try to design consumer-friendly primary batteries in connection with his electric pen copying system and his electric phonograph, but he was never able to overcome the problems presented by the need to replenish chemicals and electrodes in wet cells. Edison did make important improvements in primary battery design, notably for the Edison-Lalande cell, which was used for a variety of purposes. Edison also investigated storage batteries in the early 1880s in connection with central stations but decided that they were not efficient for that purpose. However, the advent of automobiles in the late 1890s spurred him to develop a storage battery to power them. Aware of the weight problems with lead acid batteries, Edison decided to experiment with alkaline electrolytes, such as those used in the Edison-Lalande cell in order to develop a lightweight and long-lasting battery. However, it took him a decade to develop a commercially viable iron-nickel battery and by that time automobiles powered by internal combustion engines had become dominant. Edison did find an extensive market for his battery in a variety of industrial uses, and it was the most successful product of his later life. 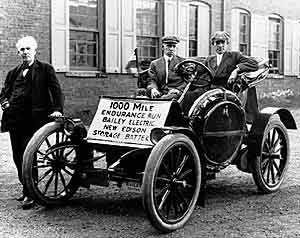