When Edison began working on the telephone in 1876 he focused on the weak point in Alexander Graham Bell's system—the transmitter. In Bell's transmitter, sound waves vibrated a permanent magnet that in turn set up an induced current in the instrument's electromagnet. Instead of telegraphy's make-and-break signal, the telephone used a continuous variable current (termed undulatory) which, when transmitted through the line, could be turned back into sound waves by the receiver. However, the weak current set up by Bell's transmitter limited the distance over which it could be used. Edison decided instead to employ a battery current on the line and use the sound waves to vary the current's strength by varying the resistance of the current. In order to vary the resistance of the current, Edison decided to use carbon.

Edison's decision to use carbon drew on his efforts to understand the subtleties of the cable telegraph system he had seen in England in 1873. In order to conduct laboratory experiments, he built artificial cables using high-resistance rheostats made of carbon-filled glass tubes. He found his artificial cables to be unreliable because the resistance of the carbon varied due to noise and movement, but this kind of sensitive variable resistance was just what he needed for the telephone. By the end of 1877, Edison had devised a transmitter in which a small button of lampblack carbon was placed beneath the diaphragm of the transmitter. As sound waves moved the diaphragm, the pressure on the button changed, thus varying the resistance of the current. Edison finalized the form of the diaphragm and button arrangement the following February. The carbon buttons for early Edison telephones marketed by Western Union were all made at the Menlo Park Laboratory. The lampblack was produced at the laboratory as a byproduct on the glass chimneys of kerosene lamps that burned continuously in a small shed. The lampblack was then scraped off the glass and pressed into buttons. In 1885, Edison developed an improved carbon transmitter for the Bell Telephone Company that used granules of roasted anthracite coal rather than lampblack. Edison's basic design continued to be commonly used until the advent of digital telephones in the 1980s. 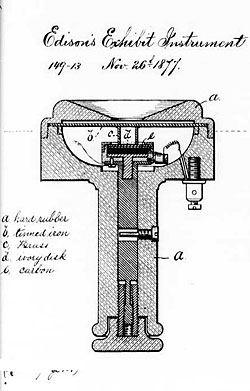