In July 1877, while developing his telephone transmitter, Edison conceived the idea of recording and playing back telephone messages. After experimenting with a telephone "diaphragm having an embossing point & held against paraffin paper moving rapidly," he found that the sound "vibrations are indented nicely" and concluded "there's no doubt that I shall be able to store up & reproduce automatically at any future time the human voice perfectly." Edison periodically returned to this idea, and by the end of November, he had developed a basic design. The first phonograph consisted of grooved cylinder mounted on a long shaft with a screw pitch of ten threads per inch and turned by a hand crank. Instead of paraffined paper, Edison used a piece of tin foil wrapped around the cylinder as a recording surface. The first phonograph had separate recording and playback mechanisms, but later designs combined them into a single unit.

Satisfied with his design, Edison had machinist John Kruesi construct the phonograph during the first week of December 1877. Edison later recounted that when he explained to Kruesi that the machine was going to record and playback speech "he thought it absurd." When Kruesi finished making the phonograph Edison put on the tin foil and then recorded the nursery rhyme "Mary Had a Little Lamb"; Edison's daughter Marion was at the time nearly five years old and his eldest son was almost two. Edison then "adjusted the reproducer and the machine reproduced it perfectly. I never was so taken back in my life. Everybody was astonished. I was always afraid of things that worked the first time." Similar astonishment occurred the following day when Edison exhibited the new invention at the offices on Scientific American. 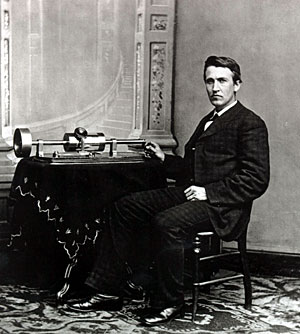 The phonograph was a marvel that amazed the scientific and technical community as well as the public because of its utter simplicity. Acoustics was a subject of much scientific interest during the nineteenth century. Scientists working to duplicate the variety of tones and overtones necessary to reproduce human speech had devised complex mechanisms for this purpose. Furthermore, they recognized the ear as one of the most complicated parts of human anatomy. As a result, the simple mechanism and operation of the phonograph seemed astounding and even prompted some initial skepticism. Edison even received a letter from one professor, who called the "idea of a talking machine ridiculous" and advised Edison to protect his "good reputation as an inventor among scientific men." But the phonograph soon became a subject of considerable interest to the scientific community, which used it to investigate the science of acoustics, and Edison was, of course, celebrated for his contribution to science.

The phonograph also made Edison's reputation as the "Inventor of the Age" and led to his most famous nickname "The Wizard of Menlo Park." Newspaper reporters flocked to the Menlo Park Laboratory to see the new invention and to interview Edison. A constant stream of articles about the inventor, including anecdotes and biographical sketches, led to his becoming one of the most famous men in the world as the phonograph was exhibited widely in the United States and Europe. However, the tinfoil recordings were never entirely satisfactory, and it was another ten years before Edison produced a more commercial design using wax cylinders for recording. 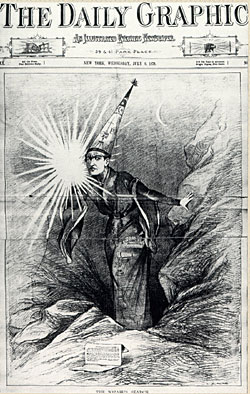 To see and hear a modern recreation of the first recording performed by Robert Rosenberg, former director of the Edison Papers, at the Lemelson Center (Smithsonian Institution) in 1997