Edison's first patented invention was a vote recorder for use by legislative bodies such as Congress. He may have been spurred by reports in the Telegrapher that the Washington, D.C., City Council planned to install an electric vote recorder and that the New York State legislature was considering one as well. In Edison's system, each legislator moved a switch to either a yes or a no position, thus transmitting a signal to a central recorder that listed the names of the members in two columns of metal type headed "Yes" and "No." The recording clerk then placed a sheet of chemically prepared paper over the columns of type and moved a metallic roller over the paper and type.

As the current passed through the paper, the chemicals decomposed, leaving the imprint of the name in a manner similar to that of chemical recording automatic telegraphs. Dials on either side of the machine recorded the total number of yeas and nays. Edison was issued U. S. Patent 90,646 on 1 June 1869. A fellow telegrapher named Dewitt Roberts bought an interest in the invention for $100 and took it to Washington, D.C. to exhibit to a committee of Congress. The chairman of the committee, unimpressed with the speed with which the instrument could record votes, told him that "if there is any invention on earth that we don't want down here, that is it." The slow pace of roll call voting in Congress and other legislatures enabled members to filibuster legislation or convince others to change their votes. Edison's vote recorder was never used. 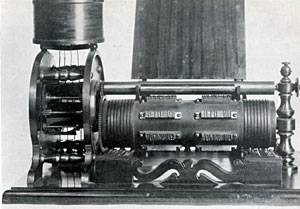