Edison's early efforts to develop a commercial phonograph using tinfoil as a recording surface had proved a failure. It was not until Alexander Graham Bell and Charles Sumner Tainter demonstrated a wax-record cylinder phonograph in the mid-1880s that Edison again turned his attention to sound recording. Between 1887 and 1889, Edison and his laboratory staff developed improved phonographs and wax cylinders that were technically superior to the Bell-Tainter graphophone. However, the Edison phonograph was also much more expensive and difficult to operate due to its electric motor. As a consequence, it found only a limited market as a dictating machine. Edison also tried unsuccessfully to market a talking doll, using a small phonograph and cylinder, but these proved too fragile. 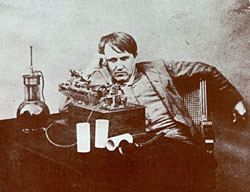 The phonograph began to find new uses in the 1890s as agents marketing the dictating phonograph installed coin slots and set up phonograph parlors where customers could listen to a recording for a nickel. Later in the decade, new phonographs appeared with cheap spring motors, and Edison again turned in earnest to developing the sound recording industry. In the late 1890s, he and his staff developed new, cheaper phonographs and improved methods of duplicating records that made Edison the industry leader for a decade. Edison also developed a new, successful dictating phonograph called the Ediphone. 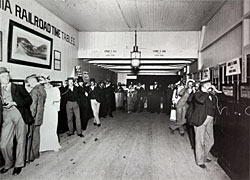