What Is an Invention?

What Is an Invention?

Technical invention is one form of human creativity, the impulse to improve our material environment.

Contrary to romantic images, scientific invention rarely occurs in a single burst of dramatic insight. Rather, invention is usually a slow incremental process, guided by a mixture of intuition, research, and painstaking work.

New things usually develop from old ones, with each inventor's work based on some established premise of the past. Though many inventors may have provided essential contributions along the way, we usually credit just one person with making the critical difference.

Alexander Graham Bell "improved the telegraph" so that it would carry sounds, creating the invention we now call the telephone. His original model used the same instrument as both transmitter and receiver.

Thomas A. Edison, 1884But when people spoke, they had to shout and repeat themselves in order to be understood.

Thomas Alva Edison "invented a telephone" in order to compete with Bell. Edison's telephone had a separate transmitter and receiver, and it worked better. When the two inventors fought in patent court, Bell won. He then bought Edison's patents (as well as other patents for improvements). Later models of "Bell's" telephone drew upon the work of many others.

What Is a Patent?

A patent is official government recognition that a device or process is considered new and original enough to merit exclusive rights for a period of time. It is up to the inventor to market the invention, and to make claims in patent court against anyone who uses the invention without a license. Patents may be challenged by other inventors who believe they are the ones entitled to the credit. Sometimes many different patents cover seemingly slight differences in a device or process. 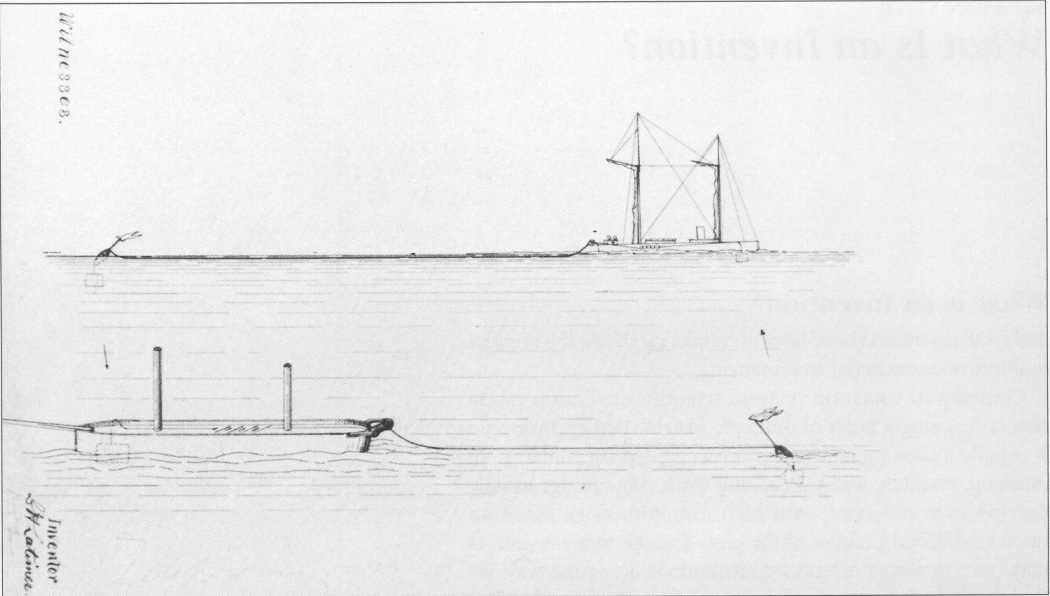 Telephoning at Sea, 1882His patents and patent drawings reflect a broad scope of inventive activity—ranging from an elevator suspension system, to a disinfecting apparatus for homes and hospitals. He grappled with theoretically challenging problems, such as how to extend electrical communication across bodies of water. His designs for simple household items combine an engineer's drive to increase effectiveness, and an artist's eye for the details of everyday life.

A Generation of Inventors

Bell and Edison were born in 1847, Latimer in 1848. Hiram S. Maxim, another famous inventor with whom Lewis Latimer was associated, was born in 1840. The early careers of these four men are remarkably parallel and illustrate the opportunities and resources available to young engineers and inventors in late nineteenth-century America.

Each of these men lacked formal scientific training. Each wanted to achieve financial security through marketable inventions, and each was a careful observer and experimenter. Throughout their adult lives, all four inventors continued to study new subjects, eagerly approaching new opportunities as they arose.