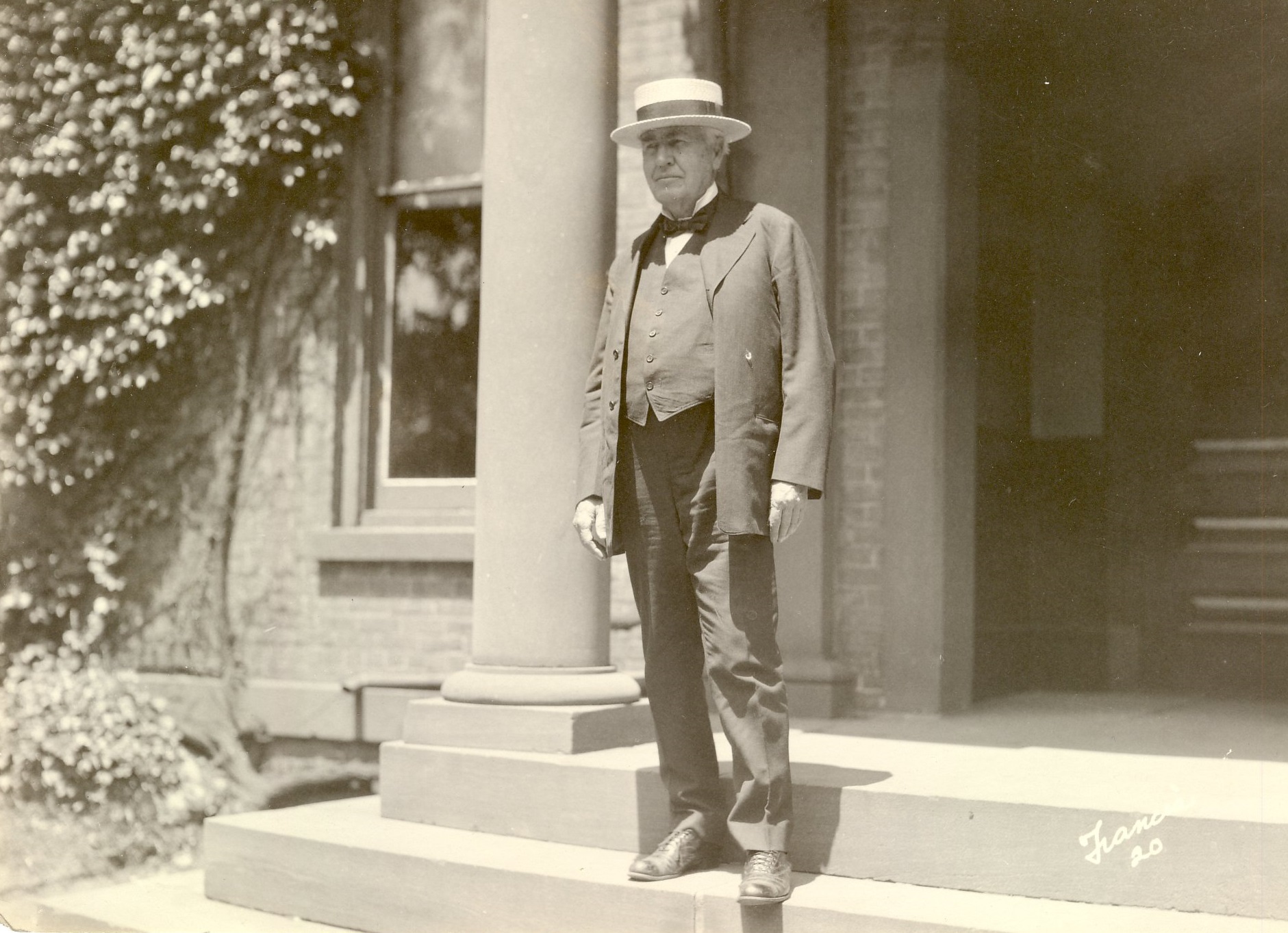 The name of Thomas Edison has been closely associated with Rutgers University since the university won a competition to host the Edison Papers. Edison himself had a personal relationship with the university, having spent a good deal of his career in close proximity to its New Brunswick campus. He received two honorary degrees from Rutgers, donated electrical apparatus to the school, and stirred up a bit of controversy among students and faculty with the intelligence tests he instituted for employees in 1920.  Edison also hired Rutgers graduates, including his experimenters John Marshall, Edward Payne, and Charles Deschler. 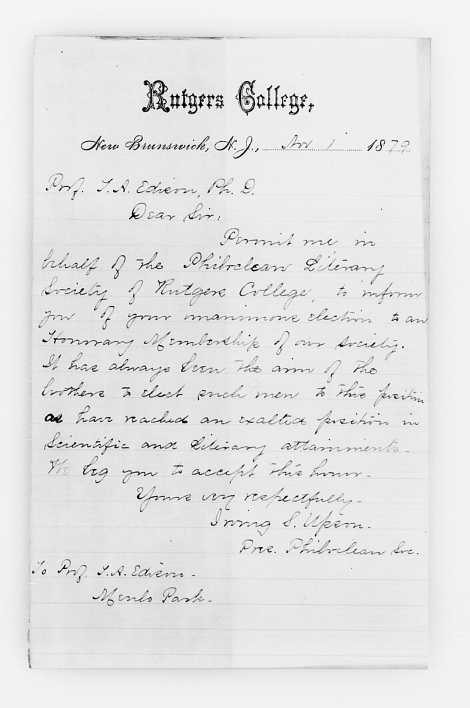 Edison received his first honorary degree from Rutgers in 1879.  He did not attend the ceremony but in a letter to David Demarest , the secretary of the college, he acknowledged the honorary doctor of philosophy degree and asked Demarest to thank the board of trustees.  In November that same year, he received a letter from the Rutgers College Philoclean Society, notifying him that he had been unanimously elected to an honorary membership.  “It has always been the aim of the brothers,” explained society President Irving S. Upson, “to elect such men to this position as have reached an exalted position in Scientific and Literary attainments.” 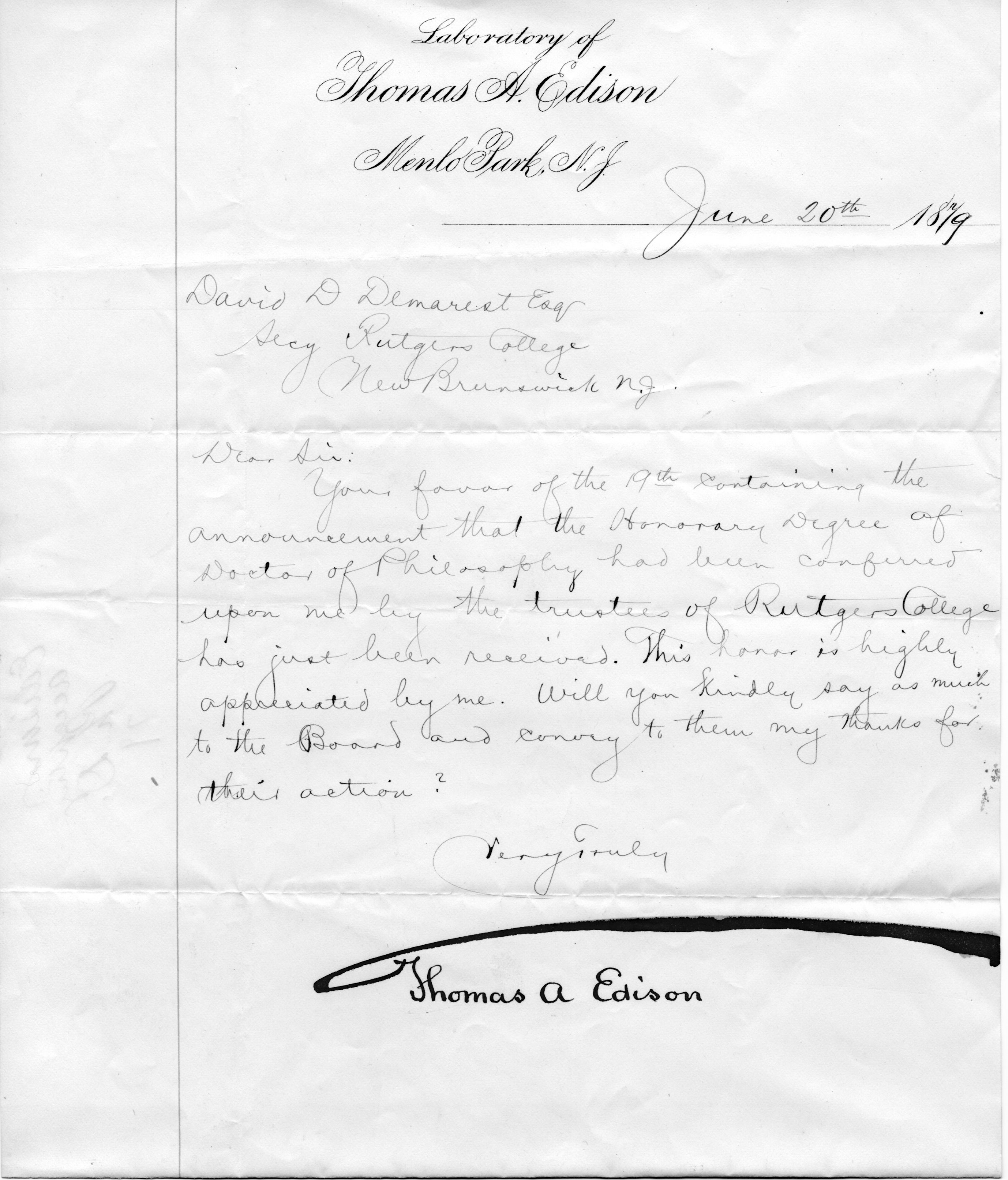 In 1892, Charles L. Edgar of the Edison Electric Illuminating Co. of Boston asked Edison to persuade the Edison General Electric Co. to donate an “electrical outfit” to Rutgers. Edison endorsed the idea and directed his secretary, Alfred Tate, to forward Edgar’s letter to Samuel Insull, vice president of Edison General Electric.  “Mr. Edison considers it good policy,” wrote Tate, “to make these presentations and he would approve of Mr. Edgar’s request being granted.”

Edison’s relations with Rutgers were not altogether without controversy. He caused a stir in May 1921 after he returned to direct the Edison companies following his stint with Naval Consulting Board during World War I.  In Edison’s absence, his son Charles had been directing Edison, Inc.  Charles had increased the size of the company, and his interest lay, as he said himself, in putting the “business on a little more human basis.”  But upon his return, Edison expressed some dissatisfaction with Charles’s new management style. “I found the efficiency of the organization required rehabilitation,” Edison told the New Brunswick Sunday Times.  One of the reforms Edison instituted was an intelligence test for his employees and for college graduates seeking employment, which in his mind, at least, revealed deficiencies in college-level education.   “The result of this test,” said Edison, “has been astonishingly disappointing.  Men who had been through college I find to be amazingly ignorant.  They don’t seem to know anything.”

A few days later, two lawyers who had recently graduated with high honors from Rutgers and were members of the Phi Beta Kappa Society took Edison’s test.  One scored 52 out of 100, and the other, 58.  “Under Mr. Edison’s regulations,” the Sunday Times reported, “neither would have been given a passing rating.”  Some Rutgers faculty accused Edison of having “fallen into the error of confusing information and intelligence.”  One of the technical questions was: “At what speed is it safe to rotate a wheel twelve inches in diameter and two inches thick made of the best quality high-powered steel, if the wheel is mounted on a shaft?”

Dr. Walter T. Marvin, a Rutgers professor of logic and philosophy and the department chair of psychology, questioned these results. “College men vary widely from one another in information …any group of highly educated persons would probably do poorly just because such information tests are made up of questions concerning matters taken from many fields of information, and most men are specialists in their information.”  Dean Louis Gevier of Rutgers College noted further that “The important positions in professions, business and politics have been analyzed by a great many statisticians and it has been found true that the highest successes have been won by college graduates out of all proportion to their relative number.”

Edison’s intelligence test coincided with restructuring and downsizing his corporation.  By 1920, Edison’s companies had grown to approximately 10,000 employees, but by 1922, that number had been drastically reduced to 3,000. In the process, Edison and his son had some tense moments. “Father and I had some pretty heated arguments,” Charles noted soberly, and then “he virtually relieved me of the responsibility and took over.” 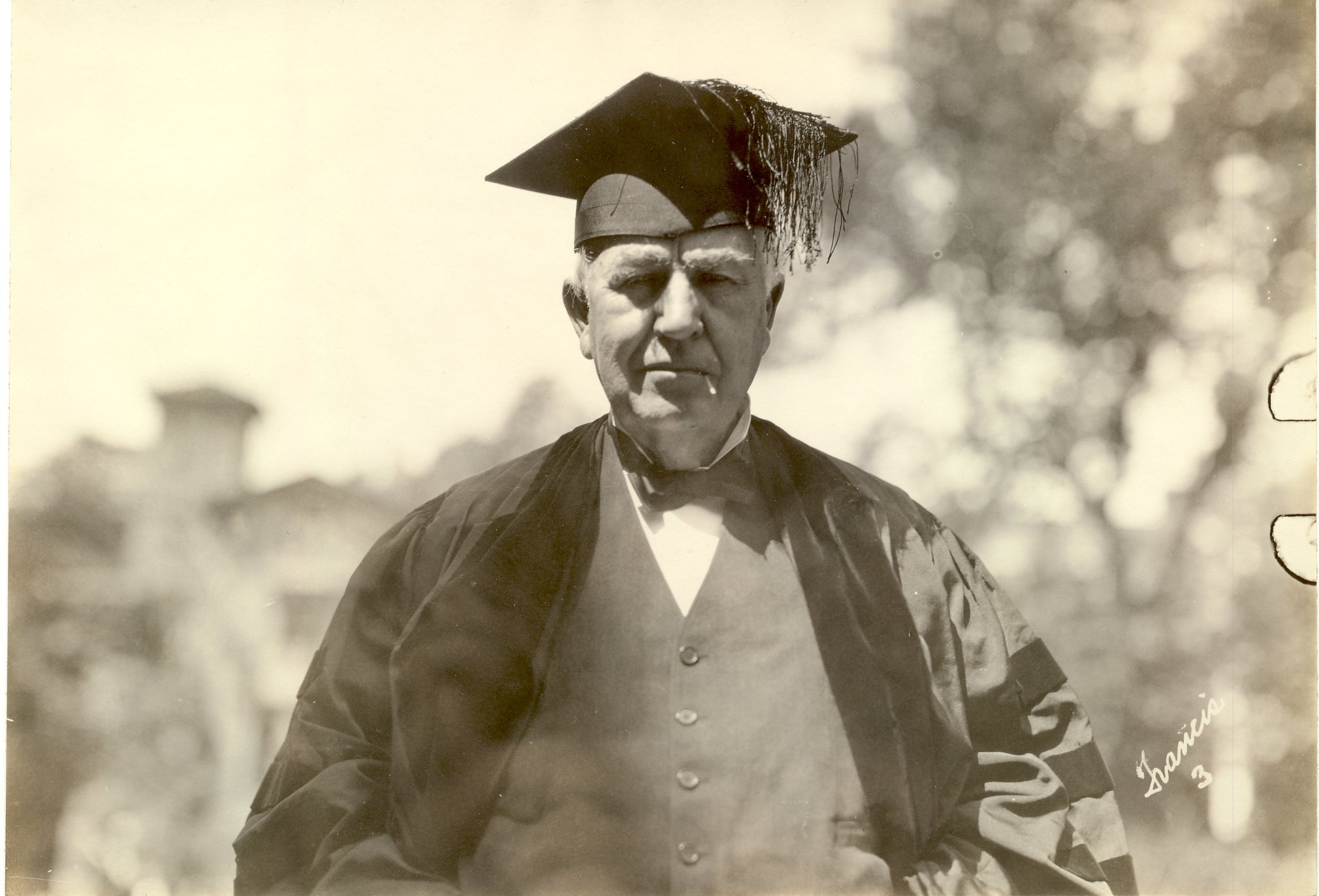 In June 1922, Rutgers conferred a second honorary degree on Edison.  This time he received a doctor of science degree. “It will give me much pleasure to come to the College on Commencement Day,” he said in his letter of acceptance, “unless something entirely unforeseen happens to prevent.  In the meantime, the matter shall remain in confidence, as suggested.”

Charles L.  Edgar, who was again involved, asked Rutgers President William H. S.  Demarest “whether Mr. Edison should bring along his doctor’s hood from Princeton,” an acknowledgment that Edison had already collected quite a few honorary degrees by this time.

The Daily Home News announced that Rutgers would confer the degree “in recognition of his splendid achievements in the cause of civilization” and went on to note that Edison made “many things which go to make life pleasanter and better for the people of the world.”  On the day of the ceremonies, the same paper opined that "few names are so well known either in this country or anywhere in the world as that of the man who is receiving this degree.  We are proud to know that he is a Jerseyman and proud to have him in New Brunswick as a guest of the college and of the city also.  The reason for the high esteem in which he is held lies in the fact that his life has been a constant period of service to the people of the world. To him in large measure is due the height to which modern civilization has advanced.  Progress is not due to the development of the human race as a whole but rather to the extraordinary efforts of a few outstanding men whose achievements have been accepted and utilized by mankind.  If it were not for the fact that in every age there are a few men who stand out above the rest mankind would never have advanced beyond the brute state."

In contrast to 1892, Edison personally attended the commencement ceremonies, which were held for the first time at the new Rivoli Theater in New Brunswick with some 2,000 people in attendance. “Mr. Edison never makes a public speech,” one local paper reported, “and so did not make any exception last Tuesday when he was rendered a great ovation by the alumni of Rutgers.” 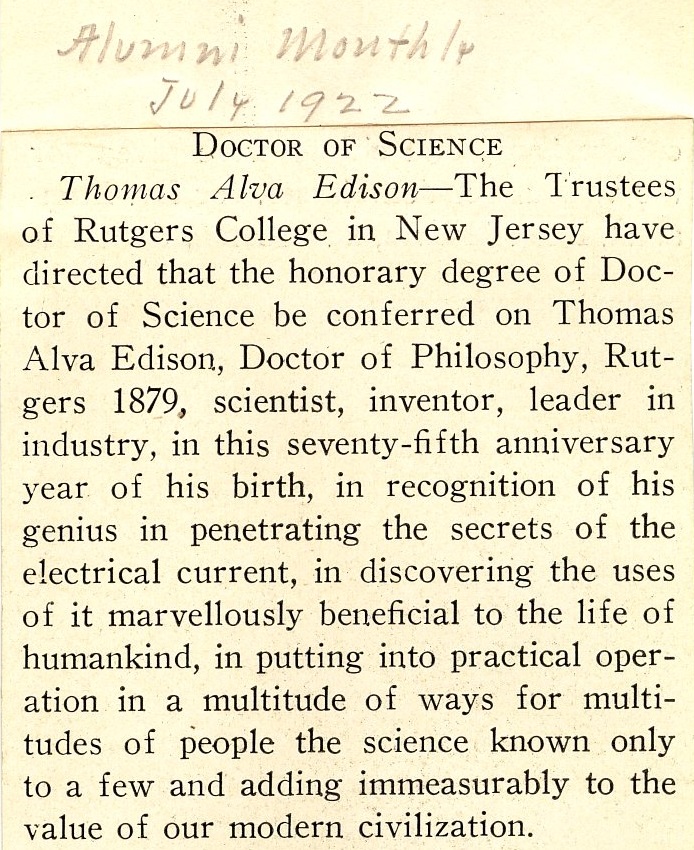