An unexpected piece of the past.

We preserve quite a bit of material related to Thomas Edison here at the Smithsonian’s National Museum of American History. The national collections include objects related to famous successes like incandescent lamps, phonographs and motion picture equipment as well as lesser known inventions such as electric pens, alkali batteries and Edison-effect lamps. We also preserve failures like the talking doll since even Edison struck out on occasion.

As one might expect given Edison’s many projects, every now and then something unexpected turns up. I learned of one such piece in 1999 while talking to James O. Weber of York, Pennsylvania who offered to donate “an old motor made by Thomas Edison.” My initial reaction was skepticism but then Weber told me he went to high school in Sunbury, PA and the motor was used at that school. That caught my attention. Edison’s first 3-wire station began powering Sunbury’s electric lighting system in 1883. (Edison Papers 7, 39ff; Carlat and Weeks; Jehl, 937, 1003, 1096-99). The photos Weber subsequently sent showed a small, almost miniature, version of an early bi-polar direct current motor that had obviously seen much use. Weber’s story about the motor suggested that this small device might have something to teach us about Edison’s fledgling electric utility business.

Weber received the motor from Harry L. Keefer (1902-1978), his former science teacher at Sunbury High School. Francis Jehl, in Menlo Park Reminiscences, referred to Keefer as “the Edison Historian of Sunbury.” (p.1101) An article in the Sunbury Daily Item reported that Keefer had “organize[d] the Edison Science Club of Sunbury High School.” Weber assisted Keefer in class demonstrations and recalled that Keefer used the motor as a non-functioning model for classroom demonstrations. He could not remember precisely how Keefer obtained the motor but believed that Edison sent it for classroom use. Weber stayed in touch with his teacher after graduation. Late in life, Keefer gave him the motor “because he knew I was interested in such things.” Later, Weber looked at the old motor and thought of the Smithsonian. 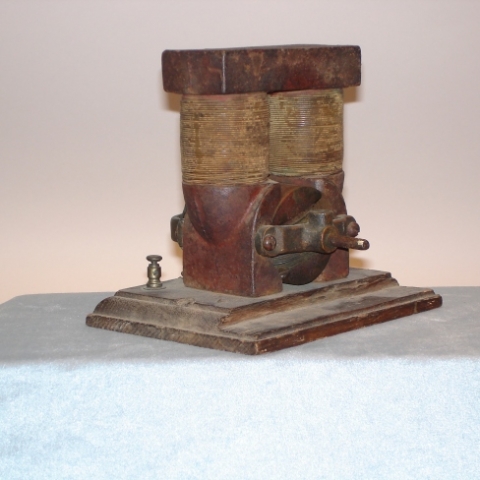 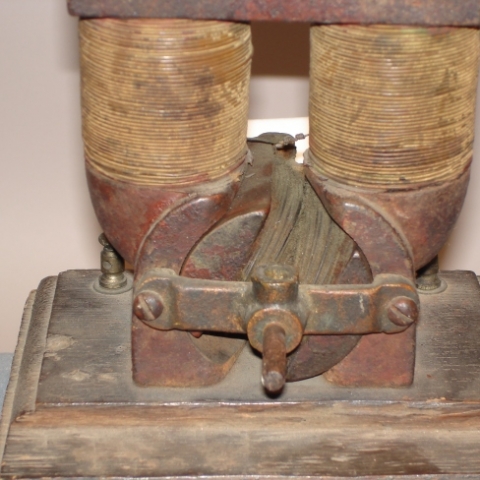 This motor is indeed a rudimentary example. For example, armature construction is a science of its own with drums of various cross-sectional shapes and coils wound in complex configurations. We have a variety of early armatures in the collections that show ways engineers learned to coax more power out of their designs. The armature on this motor could hardly be simpler, a single coil wrapped lengthwise around the drum. Built this way, the armature could produce little power but like a good teaching tool would clearly show the principle of winding.

The question remains of how Keefer came by the motor. Did Edison give the motor to him when Keefer, then a high school student, visited the West Orange laboratory around 1916? (Keefer, 196) Might Edison have made a gift of the motor during a visit to celebrate Sunbury’s sesquicentennial in 1922? Or did Edison perhaps send the motor to Sunbury earlier? A cardboard label accompanying the motor may give a clue: “Electric motor. Used in early experimenting at Edison’s Sunbury Plant. E. Vine St. near N. Fourth St.” The motor seems far too basic for Edison’s level of technical knowledge in 1883 so it may have served another purpose.

When Edison and his team first came to Sunbury, they needed to teach others how to operate the new equipment. Steam engineering and gas lighting were mature technologies by then but electric lighting and bulk power generation were still in their infancy. Edison’s team had learned lessons the hard way but few others understood the nuances of how to run their system. As Louis Carlat and Daniel Weeks wrote, “concerns about the capability of local skilled and semiskilled labor to operate the machinery with only a few weeks of training would haunt [Edison’s] experience not only at Sunbury but in a number of other plants.” (p. 312)  Edison understood that he was promoting a new industry that would require workers to learn new, highly technical skills. So perhaps the motor came to Sunbury as part of that training process and only later made its way to Keefer’s science class.

We may never know the answer, a situation not uncommon when studying the past. Historians are constrained by sources that are seldom as complete as we’d like. But every so often a new piece of the past surfaces–a letter, a photograph or a small motor. One more part of the much larger puzzle.

– Hal Wallace, Associate Curator of the Electricity Collections at the National Museum of American History.